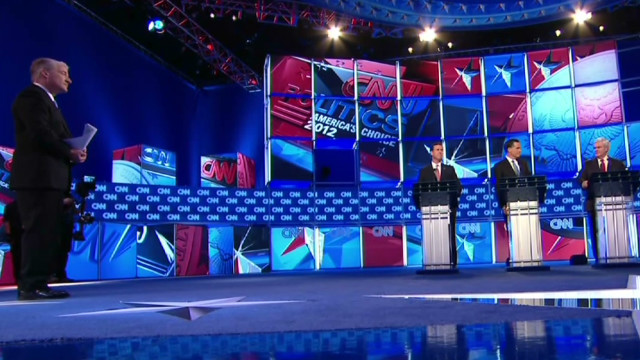 CNN’s chief national correspondent John King stands by his decision to ask Newt Gingrich about his marriage at the start of the Southern Republican Presidential Debate.  A highlight from today’s “The Truth” segment from John King, USA is after the jump.

CNN’s John King: “I decided it was the lead political story of the day — like it or not.  And we had an obligation to ask about it.  I was doing my job as I see it. And the speaker?  He was doing his — as he sees it.”

JOHN KING, HOST, JOHN KING USA:  I’ve been covering campaigns for a quarter century now.  This is my seventh presidential election cycle.  My job is to report the news, not be part of the news.  Well, today I guess I am.

KING:  She says you asked her, sir, to enter into an open marriage.  Would you like to take some time to respond to that?

NEWT GINGRICH, REPUBLICAN PRESIDENTIAL CANDIDATE:  No, but I will.

GINGRICH:  I think — I think the destructive, vicious, negative nature of much of the news media makes it harder to govern this country, harder to attract decent people to run for public office.  And I am appalled that you would begin a presidential debate on a topic like that.

I respect all of those opinions and arguments, even as I strongly stand by our decision.  If you do what I do for a living, you better be ready to take some lumps.  And you should welcome a healthy debate over everything we do.

But here’s tonight’s truth — as we had this debate, and I do welcome it, let’s not ignore the obvious and time-tested political calculation in the speaker’s response.

GINGRICH:  I am tired of the elite media protecting Barack Obama by attacking Republicans.

KING:  Attacking the media is a Gingrich trademark and a guaranteed Republican red meat applause line.

GINGRICH:  I for one, and I hope all of my friends up here, are going to repudiate every effort of the news media to get Republicans to fight each other to protect Barack Obama who deserves to be defeated.

I’d love to see the rest of tonight’s debate asking us about what we would do to lead an America whose president has failed to lead instead of playing Mickey Mouse games.

KING:  Plus, compare the speaker’s debate outrage at me with a much calmer response earlier in the day when he was asked essentially the same question absent the debate studio and the national television audience.

GINGRICH:  I’m not going to say anything about Marianne.  My two daughters have already written to ABC complaining about this as tawdry and inappropriate.

KING:  In his debate answer he did say something about Marianne.  He called her a liar.

GINGRICH:  Let me be quite clear.  The story is false.  Every personal friend I have who knew us in that period says the story was false.

KING:  Knowing his history, some of those criticizing the question argue I should have known I was teeing up a major political opportunity.  We knew that was a possibility and we wrestled with it.

Plus, his second wife’s timing coming forward, just before South Carolina votes, is more than a little curious.  We wrestled with that, too.

In the end, we decided — I decided it was the lead political story of the day — like it or not.  And we had an obligation to ask about it.  I was doing my job as I see it.

And the speaker?  He was doing his — as he sees it.