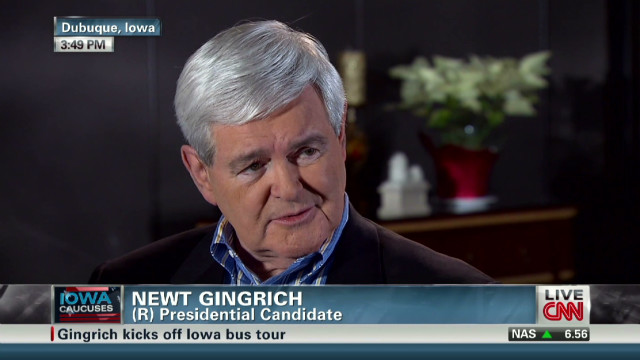 Gingrich on Ron Paul: “He’s not going to get the nomination. It won’t happen.”

In an interview today on CNN’s The Situation Room with Wolf Blitzer, GOP presidential candidate and former House Speaker Newt Gingrich sat down  with Wolf Blitzer to talk about his campaign for the White House and much more. Three highlights from the interview are after the jump and a full transcript will be posted on CNN.com.

Highlight from interview – Gingrich on Campaign Ads
THIS IS A RUSH FDCH TRANSCRIPT. THIS COPY MAY NOT BE IN ITS FINAL FORM AND MAY BE UPDATED.

WOLF BLITZER, CNN HOST:   Welcome back.  We’re here with Republican presidential candidate Newt Gingrich.  We’re here in Iowa.  Just wrapping up this one, are  you going to attack them?  Are you going to fight back?  Because under the theory if you’re slapped, you should slap back.  You don’t want to do that?

And I think the people of Iowa have a great  opportunity in the caucus to  send a signal to the country  that negative ads written by dishonest consultants on behalf of irresponsible candidates don’t deserve getting votes.

BLITZER:  Will you hold on to that if get the Republican nomination in a fight against President Obama?

GINGRICH:  Sure, all you have to do is tell the truth about Obama and it feels like a negative ad.

BLITZER:  But your super PACS or whatever, they’ll go after him.

GINGRICH:  But we’ll — no, but we’ll tell the — we’ll tell the truth.  I mean, I’m happy to say he’s the — he’s the best food stamp president in American history.  That’s not an attack.  That’s a statement of fact.  It’s a little — I mean, you  have to distinguish between  being allowed to have a factual  debate and the kind of negative  ads you were describing that are drowning the people of Iowa.

Highlight from interview – Gingrich on Ron Paul
THIS IS A RUSH FDCH TRANSCRIPT. THIS COPY MAY NOT BE IN ITS FINAL FORM AND MAY BE UPDATED.

BLITZER:  Serial hypocrisy?  That’s what Ron Paul is accusing you of.  And you’re telling me — and I’ve covered you and have known you for a long time.  Somebody says you’re involved in serial hypocrisy and you’re not going to fight back?

GINGRICH:  Well, first of all, as people get to know more about Ron Paul, who disowns 1- years of his own newsletter, says he didn’t really realize what was in it, had no idea what he was making money on, had no idea that it was racist, anti-Semitic, called for the destruction of Israel, talked about a race war, all this is a sudden shock to Ron Paul?

There will come a morning people won’t take him as a serious person.  This is — this is a man who happened to have had a good cause, auditing the Federal Reserve, cleaning up the Federal Reserve.  And I think as a — as a protest, he’s a very reasonable candidate.

BLITZER:  Now, if he were to get the Republican nomination —

BLITZER:  What would you do?

BLITZER:  Would you vote for President Obama?

BLITZER:  I’m not so sure he says Israel destroyed.  But what he does say, he doesn’t think Iran represents a threat to Israel even if it had a nuclear bomb.

GINGRICH:  What he says is that’s a risk he’s willing to take.  And he just had one of his former staff say flatly that he doesn’t — that he said over and over again Israel was a mistake.  I mean, I think it’s very difficult to see how you would engage in dealing with Ron Paul as a nominee.

GINGRICH:  Given the newsletters, which he has not yet disowned —

BLITZER:  You could not vote for Ron Paul —

GINGRICH:  He would have to go a long way to explain himself, and I think it would be very difficult to see today Ron Paul as the Republican nominee.

BLITZER:  What would you do if the choice were Ron Paul or Barack Obama?

GINGRICH:  I think you’d have a very hard choice at that point.

BLITZER:  But would you —

BLITZER:  What would you do?

GINGRICH:  I don’t know, but I think Barack Obama is very destructive to the future of the United States.  I think Ron Paul’s views are totally outside the mainstream of virtually every decent American.

BLITZER:  So, you don’t accept this explanation that he never read that, he never wrote —

BLITZER:  — only years later did he look at it.

Would I be willing to listen to him?  Sure.  Are there circumstances you’d have to weigh heavily?  Yes.  I think the choice of Ron Paul or Barack Obama would be a very bad choice for America.

BLITZER:  Would you run as a third —

BLITZER:  Would you run as a third-party candidate?

GINGRICH:  He’s not going to.

GINGRICH:  He’s not going to get the nomination.  It won’t happen.  The people in the United States are not going to accept somebody who thinks it’s irrelevant if Iran gets a nuclear weapon.

And I think that is a national security threat to the United States of the first order, and I’m very willing to draw the line and say to everybody in this country, if you think it doesn’t matter for the Iranians to have a nuclear weapon, then Ron Paul’s a reasonable candidate.  But if you think the Iranians might use it on an American city, then you had better find a different candidate than Ron Paul.

Highlight from interview -Gingrich’s message for Mitt Romney
THIS IS A RUSH FDCH TRANSCRIPT. THIS COPY MAY NOT BE IN ITS FINAL FORM AND MAY BE UPDATED.

GINGRICH:  I have a very simple message for Mitt Romney.  I’ll meet him anywhere in Iowa for 90 minutes, just the two of us, in a debate, with a timekeeper and no moderator.  I’d love to have him say that to my face.

He’s buying millions of dollars in attack ads through a phony super PAC run by his former staff, paid for by his millionaire friends.

And frankly, explain why he was a — he wasn’t a job-creating governor.  His current plan is much weaker than mine.  So, I’d like to debate the Gingrich supply-side conservative economic plan versus the Romney moderate plan, which is much weaker in job creation.

And I’m happy for him to have fun at a distance, but I’d like to invite him to spend 90 minutes debating face-to-face.

GINGRICH:  He’ll certainly see the video.  All I’d say, Mitt, is if you want to run a negative campaign and you want to attack people, at least be man enough to own it.  That’s your staff and that’s your organization, those are your millionaire friends paying for it.

And let’s be clear.  I’m willing to fight for real job creation with a real Reagan-Kemp-style job creation program.  You are a moderate Massachusetts Republican who, in fact, is very timid about job creation.  Let’s get it on together and let’s compare our two plans.