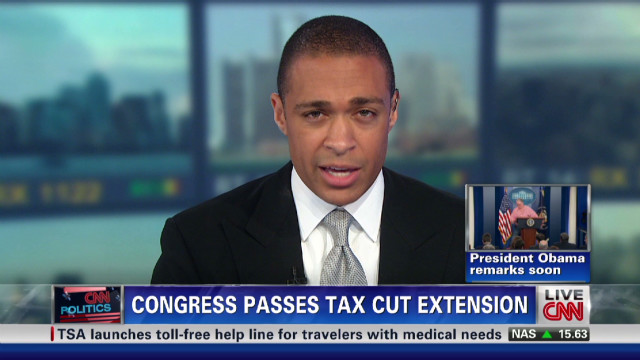 Rep. Huelskamp to CNN on his possible objection to the payroll tax cut deal

Rep. Tim Huelskamp (R-KS) spoke with CNN about his possible objection to the payroll tax cut deal. Two highlights from the interview are after the jump.

Please credit all usage of the interview to CNN

Highlight from Full Transcript
THIS IS A RUSH FDCH TRANSCRIPT. THIS COPY MAY NOT BE IN ITS FINAL FORM AND MAY BE UPDATED

T.J. HOLMES, CNN ANCHOR: Representative, did you give any thought to going back and going on the House floor and objecting today?  That’s all it would have taken, one person could have stopped this.  Did you think about doing that?

HUELSKAMP:  Actually, I did.  Problem was by the time we were notified that the unanimous consent agreement would be offered, where I come from in Kansas, I can’t get to Washington quick enough on this short notice.

So that was an option, we did think about that, but there’s no way to fly in on time to make that happen.  Back on the pledge to America, we talked about 72 hours where big things like this would give us an opportunity to reel read the deal, actually read the bill.  And in this case they decided to not follow that rule as well.

Highlight from Full Transcript
THIS IS A RUSH FDCH TRANSCRIPT. THIS COPY MAY NOT BE IN ITS FINAL FORM AND MAY BE

WOLF BLITZER, HOST, CNN’S “THE SITUATION ROOM”:  That’s what compromise is all about.  But Congressman, a quick question, do you still have confidence in your speaker, John Boehner?

HUELSKAMP:  Well, I’m disappointed in our entire leadership team.  We have not cut spending.  We didn’t force the president to the table when it came time to give him $2 trillion of borrowing authority.

We didn’t pass the balanced budget amendment.  These are things that nearly all of the Republicans ran on last fall and we have yet to deliver on them and I think I am frustrated but I think more importantly most Americans are frustrated.

The ones that elected a conservative majority in the House, what difference did it make?  We’ve got a long ways to go.  This is just the last loss we’ve had this year.  We’ve had numerous other losses as we’ve gone along — Wolf.