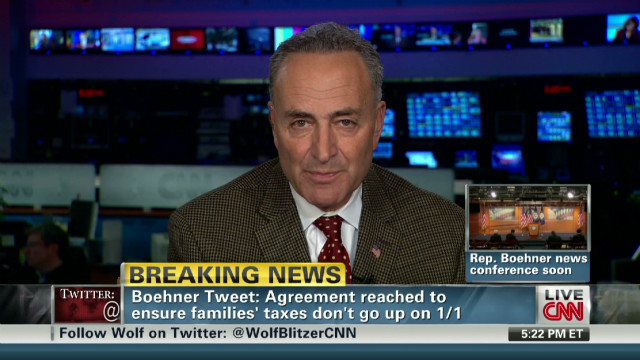 Sen. Schumer: We are very glad because it’s a win for the American people.

Sen. Charles Schumer (D-NY) spoke with CNN’s Wolf Blitzer today about the payroll tax cut deal. This interview aired in the 5 p.m. ET hour of The Situation Room with Wolf Blitzer. A highlight from the interview is after the jump.

Please credit all usage of the interview to CNN’s The Situation Room with Wolf Blitzer
Highlights from Full Interview
THIS IS A RUSH FDCH TRANSCRIPT. THIS COPY MAY NOT BE IN ITS FINAL FORM AND MAY BE UPDATED.

WOLF BLITZER, CNN ANCHOR:  Chuck Schumer, the senior senator from New York, is joining us right now.  He’s obviously been a player in all of this. Senator Schumer, thanks very much for coming in. But I assume you’re very happy that this deal looks like it’s going to happen.

SEN. CHARLES SCHUMER (D), NEW YORK:  Yeas, we are very glad because it’s a win for the American people.  To have the middle class payroll tax cut expire would have been bad for middle class families and bad for our whole economy, so we’re glad that the House has come to its senses and basically passed the Senate bill.  They suggested a technical correction which is a good one, but the Senate bill is largely passing intact.

BLITZER:  So, correct me if I’m wrong.  Basically, the House/Senate conferees, the members, are going to have two months right now to work out a deal that will allow this tax cut to continue for the rest of the year, allow unemployment benefits to continue, and allow these Medicare reimbursements for physicians to continue.  But that’s easier said than done, isn’t it?

SCHUMER:  It is. And we will see if our House colleagues really have good faith.  If they do what they did on their first bill, load it up with so many things that make it unpalatable to just about anybody, then we’ll know that they’re really not with good faith to get this done for a year.  But there are — because of the work of the super committee, there are pay-fors that are not easy, but can bring about bipartisan agreement.

That will be the job of these conferees, and hopefully the extreme wing in the House, who initially was against any payroll tax cut, then was only for one if it was so loaded up with things that were unpalatable to the rest of us that we were never going to get one, if they don’t run the show, we can get this done.  If Speaker Boehner continues to let them run the show, then we won’t be able to get it done.  It’s that simple.

But this is a good first start.  Speaker Boehner has ultimately prevailed over this hard-right minority in this caucus, and hopefully it’s a metaphor for the future, because for a while, they wouldn’t take yes for an answer, and now they finally have.