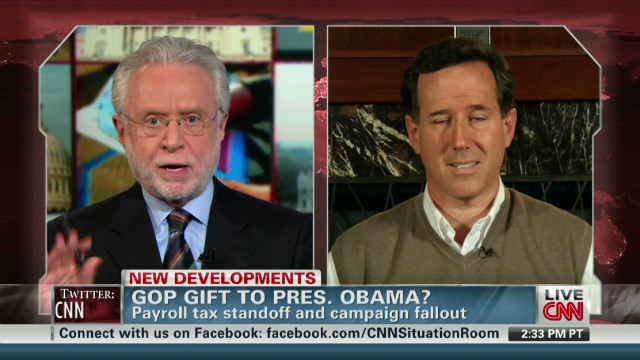 In an interview today on CNN’s The Situation Room with Wolf Blitzer, former Pennsylvania Sen. Rick Santorum spoke with Wolf Blitzer about the payroll tax cut negotiations, his recent endorsement and his recent comments on income inequality. A highlight from the interview is after the jump; please visit CNN.com for a full transcript.

WOLF BLITZER, CNN ANCHOR:  Getting down to the wire right now for Republican candidates before the first presidential votes are cast in Iowa.  Some fear a risky stalemate in Congress could hurt the Republicans’ chances, though, of reclaiming the White House.

Senator, thanks very much for coming in.  And let me get right to the issue of the moment here in Washington.  Are you with House Republicans or Senate Republicans when it comes to extending the payroll tax cut for middle class American families?

You can’t play this game that President Obama is playing that Social Security is this sacrosanct program, and at the same time, use funds from Social Security to pay for something else.  In this case, tax cuts.

BLITZER:  Well, let me just interrupt and ask the question then.  I take it you’re not with John Boehner or Mitch McConnell.  You wouldn’t vote to extend the payroll tax cut for another year.

But am I hearing you correctly, Senator?  You’re saying you do want to increase taxes January 1st for 160 million Americans?

I am for tax cuts.  I’d be very happy to come back and talk to the president about how we’re going to provide tax relief for millions of Americans.  But I’m not — I’ve never been for a Social Security tax cut, because it undermines our ability to pay Social Security benefits.

BLITZER:  All right.  So I just wanted to make sure I fully understood.  I think you’re in the same place where Michele Bachmann is right now.

BLITZER:  She says she won’t vote to extend this payroll tax cut —