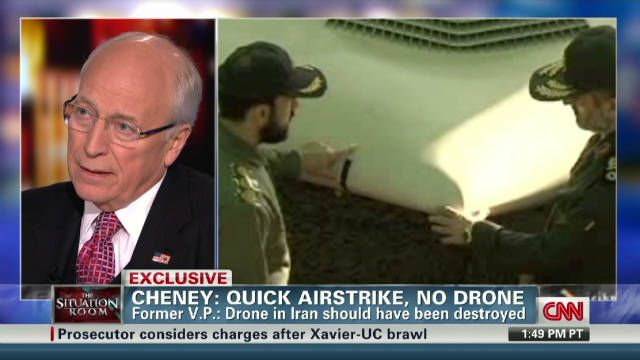 Former U.S. vice president Dick Cheney says President Obama failed to take appropriate action to protect American spy technology when a CIA drone went down in Iran. In an interview with CNN’s Erin Burnett, Mr. Cheney said the downed drone, which is believed to have landed largely intact, should never have been allowed to fall into the hands of the Iranian government. “The right response would have been…to go in immediately after it had gone down and destroy it,” Cheney said. “I was told the president had three options on his desk. He rejected all of them.”

President Obama has asked for the drone’s return–amid concerns the radar-evading technology onboard could end up in the hands of the Chinese or even the Russians, as former defense secretary William Cohen said on OutFront. Cheney mocked the president’s request. “He asked nicely for them to return it and–they aren’t gonna do that.”