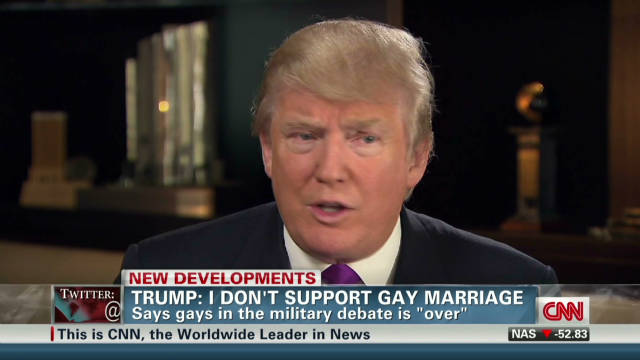 Trump on Pres. Obama: He didn’t kill bin Laden… he gets so much credit for that.

Donald Trump spoke with CNN’s Wolf Blitzer today about the current field of presidential contenders, the killing of Osama bin Laden and more. This interview aired in the 5 p.m. ET hour of The Situation Room with Wolf Blitzer. Two highlights are after the jump and a full transcript will be posted on CNN.com.

Highlights from Full Interview
THIS IS A RUSH FDCH TRANSCRIPT. THIS COPY MAY NOT BE IN ITS FINAL FORM AND MAY BE UPDATED.

WOLF BLITZER, CNN HOST:  … that if you don’t like the Republican nominee, you’ll run for president.  He says it would be malpractice as the chairman of the Republican Party not to complain, not to raise that problem.

DONALD TRUMP, ENTREPRENEUR:  Well, I don’t think so, because I intend to endorse somebody.  And if I endorse somebody, and that somebody happens to win, obviously, I’m not going to be running against somebody that I endorsed.  So I don’t really think it would be.

I’m very disappointed in Mitt from that standpoint.  But it won’t have any impact on my decision.  I’m going to pick the one that’s best for straightening out this country, because somebody has to straighten this country out fast.  We are going to hell in a handbasket.
…………..
BLITZER:  He killed bin Laden.

Now the third thing is leave him alone, and nobody — only a very stupid person would say that.  So we can take him out with a missile; we can — either way.  Either way, it’s OK.  All right?  Either way, it’s OK.  So he said, all right, let’s go get him.  Why does he get so much credit?  You know, they give him credit for that.  He shouldn’t get so much credit.  He happened to be sitting in that…

TRUMP:  Jimmy Carter was incompetent.  Look, look, very nicely, we can take him out with a missile or we can pick him up.  He’s sitting in the White House.  These military guys who were there long before he was there, they found him.  Now the bad news is, Pakistan should have told us those years before, because they knew exactly where he was.  He’s sitting right next to one of the major military bases.

TRUMP:  The ones who should get the — no, it wouldn’t have been a disaster.  It could have failed, but he didn’t — he’s not the one that made it…

BLITZER:  Maybe (inaudible) would have been…

TRUMP:  (Inaudible) great.  They were great.

BLITZER:  It was a dangerous mission.

TRUMP:  They’re great guys.  But anybody in that position, sitting, happened to be president, if you walk in, say we have bin Laden, we can either get him this way or that way, either — honestly, either solution’s OK, I almost thing the other would have been better, except this way there’s a little more poof, and a lot of people disagree with what happened after the fact, and the way he was treated so solemnly.

I mean, they treated him so solemnly after the fact, cleansed the body, washed him — I mean, give me a break.  But anybody sitting in that office, Wolf, would have — I keep hearing about, oh, bin Laden, the military did an incredible job and they called and they said, we have him.  And he said, go get him.  What’s he going to say, don’t get him?  And he gets all this credit?  It’s a lot of crap.