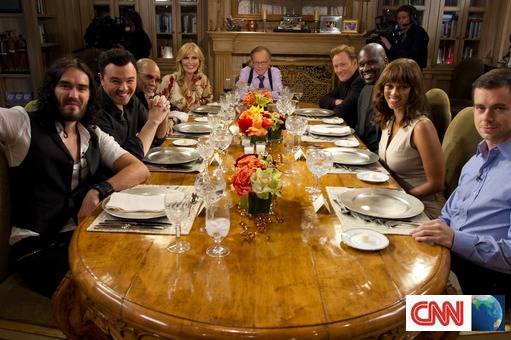 A Larry King Special: A Dinner with the Kings

Larry King and his wife Shawn host a dinner part with some of the biggest names in Hollywood and have invited CNN viewers to join them in this hour long special.

Comedian and recent Hollywood success Russell Brand talks about his new found acclaim, “How I deal with my personal, material success is guiltily”, formerly the face of Victoria’s Secret, Tyra Banks exposes her top model façade “I’m so not sexy. I know how to turn it on for a picture, but I’m not sexy in real life” and funny guy Seth MacFarlane reveals that he is “still working on my hiding my insecurity 100 percent”.

Join Larry and his guests as they discuss life, love, insecurities, success and failures at this dinner party like no other.