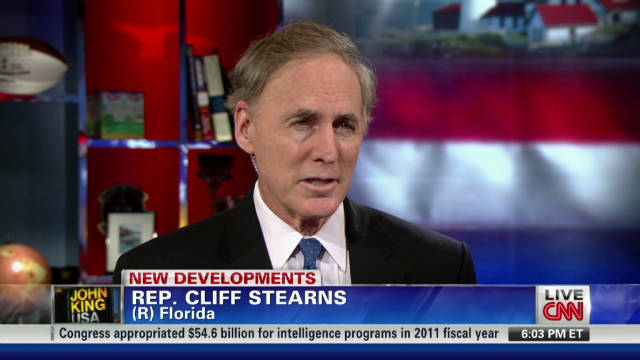 JOHN KING, HOST, CNN’S “JOHN KING USA”: So you have no doubt these subpoenas will be going, you just need to get this committee —

REP. CLIFF STEARNS (R), FLORIDA: The subpoenas will be going, and I hope the Democrats who voted against the first subpoena for OMB and DOE did not vote for it, I hope they vote for this, because this is really transparency and this is what the president talked about in his campaign in 2008.

KING: Well, the White House says they have looks at what you’re asking for.

KING: They think it’s overly broad, and they have said here are the documents we think answer your questions. Why don’t you believe them?

STEARNS: Well, the e-mails we’ve gotten so far from them indicate there’s much more. And if there is much more, then can we see it. And we’ve got authenticated proof from some of his inside, top advisers they were involved with Solyndra from other e-mails, so we’d like to see them all.

REP. CLIFF STEARNS (R), FLORIDA:  I think the secretary has to give an adequate explanation why his council went ahead and, shall we say, rewrote their interpretation of the Energy Policy Act of 2005.

And in all fairness, I’m glad he’s coming up to the committee. He has a chance to explain to the American people and our committee what happened. So I welcome him.

But also, he’s got to explain, based upon what Mr. Berner, whose the chief financial officer at the Department of Treasury, who actually cuts the check that gives to DOE to give the money out, why, after his experience, why does he think it’s OK to do this.

KING: There are a lot of Democrats in town say where was this tough oversight when Republicans ran the town, George W. Bush was president. Why didn’t the Republicans have as much oversight in those days? So they see some partisanship behind that. And I think you would concede the point, even a lot of Republicans say there was not enough over sight of the Republican president.

So, when you are saying these things, and you have a legitimate inquiry without a doubt, but when you’re saying we might be able to connect the dots to some sort of a political corruption —

STEARNS: What I’m saying is —

KING: — we think they broke the law —

KING: Chairman Issa of the other committee says the attorney general has lied. Others on the committee have said people in the Justice Department in the Fast and Furious program.

Do you worry at all — do you worry at all as you — as you go about what I hope is legitimate and tough but fair oversight, that there is an impression being laid that you have — you’re putting the judgment before the evidence when you collect statement by the Republicans involved?

STEARNS: John, I’ve not called for the resignation of Secretary Chu. Mr. Silver, who is a top loan officer, I called for his resignation at DOE, Department of Energy, and he did resign. And I think, also, the CEO of Solyndra resigned after taking the Fifth in front of me. So let’s see what Secretary Chu has to say. Let’s give him a fair opportunity to talk.