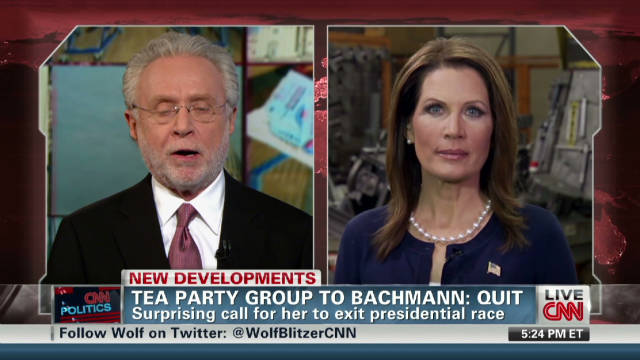 Bachmann responds to request to resign from presidential run

WOLF BLITZER, HOST, CNN’S “THE SITUATION ROOM”: All right. Were you as surprised as I was, and maybe you were or you weren’t, when this one Tea Party group, it’s called American Majority — I wasn’t exactly familiar with it, maybe you are since you’ve really been involved in the Tea Party movement — their executive director, Matt Robbins, issued a statement saying this. He said, “Let’s face it,” referring to you, “she’s a back-bencher and has been a back-bencher congressperson for years. This is not a serious presidential campaign.”

I want you to — when you heard about that, what went through your mind, because these are Tea Party activists?

BACHMANN: Well, of course, we found out that this is really a misstep on the part of the Perry campaign because these are Perry supporters that came out. This was a clumsy move. This was meant to be a stealth move to make it look like this was Tea Party, and apparently, these are Perry supporters that came out and it was just a clumsy move on their part to make this statement.

If Governor Perry has something to say to me, he can come out to the debates and he say it. But this was clearly — this egg on the face, unfortunately, for the Perry campaign. It certainly isn’t a blow to my campaign because I’ve had non-stop support coming out of the woodwork from Tea Partiers all across the country ever since this came out.

BLITZER: Do you have any evidence that it was directed or that the Perry campaign got this American Majority group involved in this? Any hard evidence, or is that just a surmise?

BACHMANN: No, this is something that people have told us, that these are Perry supporters and they went out with this and this was meant to be a stealth move and it was clumsy.

I introduced the bill to repeal Obamacare. I’m a chief author of a bill to get rid of the housing and jobs destruction an act, also known as Dodd-Frank. I’ve been a leading foe of Nancy Pelosi and the overspending, and a leading foe of President Obama. I’ve been called his chief critic in Washington D.C. That’s my badge of honor.