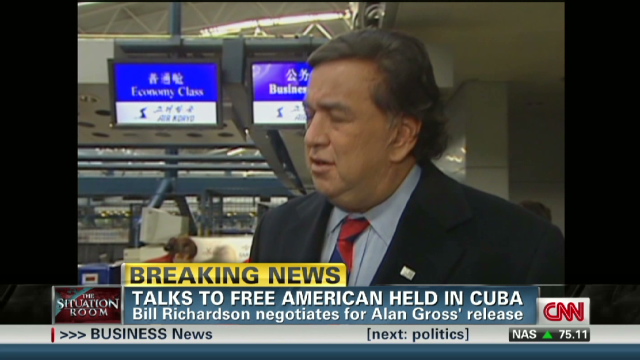 CNN’s Wolf Blitzer reports that Bill Richardson is on mission to Cuba to negotiate the release of American contractor Alan Gross.  A transcript from the report is after the jump.

Transcript of Wolf Blitzer’s Report on CNN
THIS IS A RUSH FDCH TRANSCRIPT. THIS COPY MAY NOT BE IN ITS FINAL FORM AND MAY BE UPDATED

WOLF BLITZER, HOST:  We’ll get to all of that in just a moment.

But we’re just learning here at CNN that the former U.S. ambassador to the United Nations, Bill Richardson, was scheduled to land just a little while ago in Havana, Cuba on a very important mission to try to win the release of an American, Alan Gross, 62 years old.

He’s been a U.S. government subcontractor.

He was arrested in Cuba in December of 2009, accused of subversive activity.  He’s been held there ever since.

We’re also told that the Cuban government invited Governor Richardson to come with this specific mission in mind.  We’re told that he’s expected to spent the next few days in Havana, working to find a way to release Alan Gross.

He’s sentenced to 15 years in prison in Cuba.

So we’re staying on top of this story.

We’ll get reaction from the Cuban government.

Much more coming up.

In the meantime, the headline — Bill Richardson, who’s done this on many occasions before, having gone to many countries to try to free Americans, he is — was scheduled to land just a little while ago in Cuba, with the mission of trying to free Alan Gross.

We’ll stay on top of this story for our viewers.