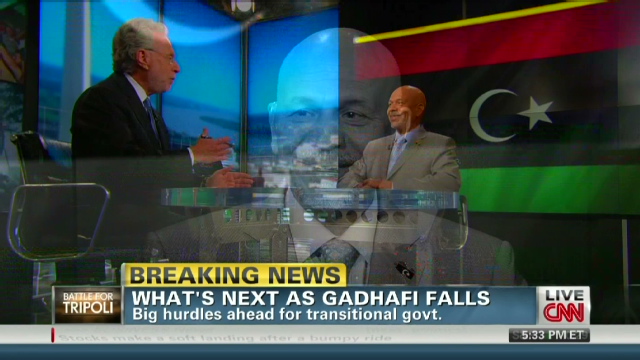 Former Amb. to Libya: One of Gadhafi’s sons escaped

Former Libyan ambassador to the United States Ali Suleiman Aujali talked with CNN’s Wolf Blitzer about the Libyan rebels and the future of Libya. This interview aired on The Situation Room with Wolf Blitzer during the 5 p.m. ET hour.  A full transcript of this interview will be posted on CNN.com

Highlight from Full Interview after the jump

THIS IS A RUSH FDCH TRANSCRIPT. THIS COPY MAY NOT BE IN ITS FINAL FORM AND MAY BE UPDATED
WOLF BLITZER, CNN ANCHOR:  And his other two sons, Mohammed and Saadi, they’re under your control?

And then, when they want to take him somewhere else for his protection, Mr. Abjalil (ph), he interfered and let him stay where he is, according to his request.  But I do understand —

AUJALI:  I do understand that he escaped today.

AUJALI:  Well, Mohammed is less aggressive among his brothers.

BLITZER:  So they let him escape?

AUJALI:  And then Mr. Abjalil (ph), he wants to deal with him this way, because Mohammed, he is the first son from a different woman, not from the same wife now Gadhafi has.  And then they want to show the world that this is the TNC, how they are dealing with Gadhafi’s sons.

BLITZER:  So they let him go?

AUJALI:  They don’t let him go.  He had been hijacked by maybe Gadhafi’s forces.

AUJALI:  It sounds very strange to me —

BLITZER:  To me it sounds very strange.