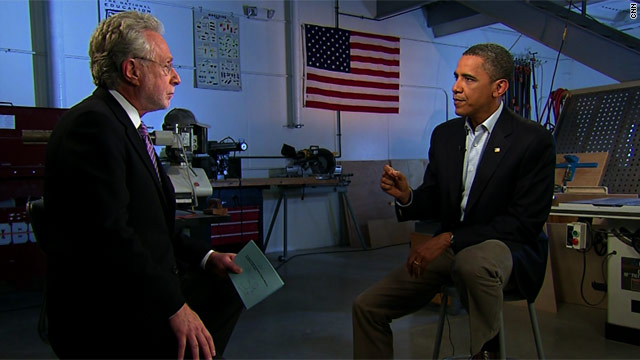 Please credit all usage of the interview to CNN’s The Situation Room with Wolf Blitzer. A highlight from the interview is after the jump.

WOLF BLITZER, HOST, CNN’S “THE SITUATION ROOM”:  Rick Perry, the governor of Texas, Republican presidential candidate now, says, the men and women of the United States military want someone who’s worn the uniform.  He says he served in the Air Force.

Do you see a comment like that, that he makes, referring to you, as disrespectful to the commander in chief?

BARACK OBAMA, PRESIDENT OF THE UNITED STATES:  You know, Mr. Perry just got into the presidential race.  I think that everybody who runs for president, it probably takes them a little bit of time before they start realizing that this isn’t like running for governor or running for senator or running for Congress, and you’ve got to be a little more careful about what you say.

But I’ll cut him some slack.  He’s only been at it for a few days now.

BLITZER:  Mitt Romney says corporations are people.  Does he have a point?

OBAMA:  Well, if you tell me that corporation are vital to American life, that the free-enterprise system has been the greatest wealth creator that we’ve ever seen, that their corporate CEOs and folks who are working in our large companies that are creating incredible products and services and that is all to the benefit of the United States of America, that I absolutely agree with.

If, on the other hand, you tell me that every corporate tax break that’s out there is somehow good for ordinary Americans, that we have a tax code that’s fair, that asking oil and gas companies, for example, not to get special exemptions that other folks don’t get, and that if we’re closing those tax loopholes somehow that that is going to hurt America, then that I disagree with.