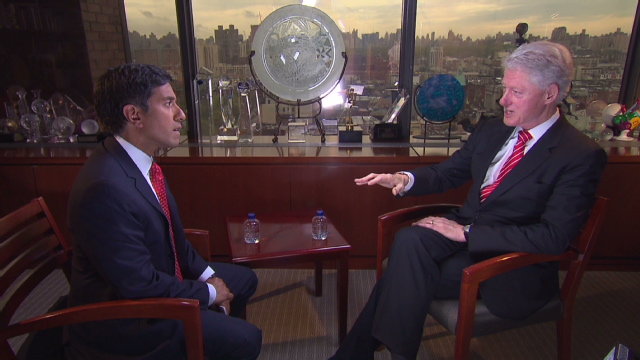 If presidents of the United Statesreceive the best health care in the world, CNN chief medical correspondent Dr. Sanjay Gupta  asks: how it is that former President Bill Clinton needed emergency bypass surgery just a few years out of office?  In a candid and revealing interview, the former president discusses the warning signs he feels he missed, and the major life change he made that he credits with his present good health.

“I was lucky I didn’t die of a heart attack,” the former president tells Dr. Gupta.  “It hurt like the devil for about three weeks …,” he continued, describing a slow recovery following his 2004 surgery.  “There was that period when you’re just not sure you can come back – that bothered me,”Clintonsays in the documentary.

Although Clintonrecalls symptoms he now recognizes as warning signs, most people who have heart attacks experience no symptoms.  And the author of The South Beach Diet books, cardiologist Dr. Arthur Agatston, says that conventional guidance on HDL (“good”) cholesterol vs. LDL (“bad”) cholesterol no longer applies.  The numerical value of a person’s LDL cholesterol is less problematic than the size of the LDL cholesterol particles.  In this case, bigger is better.  Small particles are more likely to stick to arterial walls as plaque.  When plaque particles flake off into the blood stream they can form dangerous blockages, which can cause deadly heart attacks.

Dr. Gupta, who has a family history of heart disease, reviews the latest science in heart disease diagnostics and takes his own assessment tests.  Dr. Gupta is on a quest to never have a heart attack himself.  His goal is to become “heart attack proof.”

Heart disease is the biggest killer of American men and women, but Dr. Agatston feels it doesn’t have to be.  Though not all doctors agree, Agatston tells Dr. Gupta: “One of the best kept secrets in the country, in medicine, is that doctors who are practicing aggressive prevention are really seeing heart attacks and strokes disappear from their practices – it’s doable.”

Clintonunderwent quadruple bypass heart surgery at age 58, but he tells Dr. Gupta that he feels even better now as he nears age 65 – and, he is setting new fitness goals.  He credits a large share of his progress to adopting a vegan lifestyle.

Dr. Caldwell Esselstyn Jr., director of the cardiovascular prevention and reversal program at The Cleveland Clinic Wellness Institute, describes heart disease as a “completely preventable foodborne illness.”  Dr. Esselstyn explains to Dr. Gupta, “We’re never going to end the epidemic with stents, with bypasses, with the drugs – because none of it is treating causation of the illness.”

Internist Dr. Dean Ornish, founder and president of the non-profit Preventive Medicine Research Institute in Sausalito, California, and Dr. Terry Mason, chief medical officer of Cook County Hospitals in Chicago, would agree.  Dr. Ornish introduced healthy food options to the White House menu while the former 42nd president was in office.  When he was Chicago’s public health commissioner, Dr. Mason promoted annual “meat-free Januarys.”  Dr. Mason says in the documentary: “We’ve eaten ourselves into this problem, but we can eat ourselves out of it.”  All three doctors believe that even people with risk factors, including family histories, are not doomed to heart disease.

And while most medical professionals feel diet and exercise can prevent a lot of heart disease, stress and depression play vital roles as well.  Dr. Gupta also reports insights on the lifestyles and diets of indigenous peoples in central Africa and Mexico, populations that experience virtually no heart disease.

Online at www.cnn.com, visitors will find nutrition recommendations that Dr. Esselstyn says will make users heart attack “proof.”  Digital animations demonstrate the relationship between arterial plaque and LDL cholesterol particles that cause some heart attacks.  Other interactive tools deconstruct risk factor myths, identify symptoms that should raise concerns, and explain why taking HDL-elevating medications may not be effective at preventing heart disease.

David Martin is the senior producer for The Last Heart Attack.  Roni Selig is senior executive producer for the CNN Health and Wellness Unit.