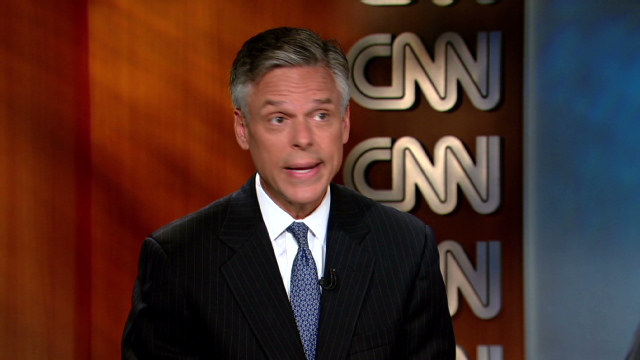 GOP presidential candidate Jon Huntsman spoke with CNN’s Wolf Blitzer today about the current debt negotiations and what Huntsman would do if he were currently President. A highlight from the interview is after the jump. Tune in to The Situation Room with Wolf Blitzer on CNN during the 5 pm ET hour today to watch Part one of this interview; part two of the interview will air next week.

WOLF BLITZER, HOST, CNN’S “THE SITUATION ROOM”: Let’s imagine you’re president of the United States right now.  You have a divided Republican caucus in the House of Representatives, a Senate Majority, a Democratic majority in the Senate.  And you’re president, and you’ve got three – four days before the debt ceiling runs out.  What do you do?

JON HUNTSMAN, REPUBLICAN CANDIDATE FOR PRESIDENT:  Use the bully pulpit in ways that speak to clear, cut, and defined goals that the people of this country want to achieve.  They want cuts.  There is a cancer growing in this country, and it’s called debt.  And everybody knows it.  And some people have tried to hide from it.

So first and foremost there’s got to be serious cuts associated with whatever we do with the debt ceiling.  Second, we have to be very clear about meeting our obligations as a country.  We’re 25 percent of the world’s GDP.  We’re the most significant financial services country in the world.  And the eyes of the world are on us as well.

You – you let it continue on until 2013.  What do you do?  If that’s the final issue that could avert default?

HUNTSMAN:  Well, as president I would look at the plans and the – the dialog.  It’s devoid of plans.  Nobody seems to have a plan.  There’s a Boehner plan which I like, and that takes care of our immediate needs.  It then pushes into next year some very important aspects…

BLITZER:  It’s not necessarily completely political.  I’ll tell you why.  Cause if the country has to go through a wrenching debate like this again next year, the whole world, the credit rating agencies, they’re all watching.

HUNTSMAN:  But the country needs this debate is the point.  This is the most important issue of our time.  It’s the cancer that I referred to early that is metastasizing in this country.  It needs to be radiated.  It needs to be excised.  It needs to be cut out.  And the only way we’re going to get there is by the people of this country speaking out in specific terms about how deep and what are priorities.  The size and role of government ought to be going forward.

So having that as part of the 2012 election cycle I think it’s a very healthy thing for this country.