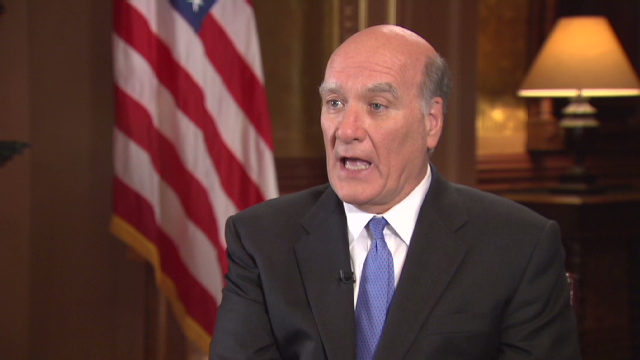 On debt deal, Daley tells Blitzer: “We are optimistic”

CNN’s Wolf Blitzer sat down in an exclusive interview with White House Chief of Staff Bill Daley to discuss the current debt negotiations. Highlights from the interview are after the jump. The full transcript of The Situation Room with Wolf Blitzer is posted on CNN.com.

BLITZER:  But then they’ve got 40 percent of the checks that are supposed to go out won’t go out.

DALEY:  Well, that — that will be the — the Treasury Department will lay out exactly how that would work after — at a certain point between now and Tuesday, obviously.

But we are optimistic.  The four leaders of the Congress have said that the debt ceiling will be extended.  We are confident that they will come together.  The — the sense — look at the stock market.  The market’s dropped over the last four days like 3 percent. Real people are losing money — pensioners, people who depend on their 401(k)s and the value of the stocks in those.  They’re losing money right now while Congress and Washington is kind of just dallying here.

BLITZER:  So the bottom line, you think there will be a deal between now and Tuesday somehow crafted…

BLITZER:  — but you’re not convinced, necessarily, that the AAA credit rating that the United States government has will remain AAA?

DALEY:  Well, I — I — I don’t — no one can guarantee that, obviously.  The rating agencies which make that judgment will look at this and will look at what comes out of this effort and to see whether or not — two things, whether or not we have a serious attempt that’s going to affect the deficit and reduce the deficit and get this cloud of another vote of another debt ceiling of uncertainty off of the table for at least 18 months, until — it’s not about the election, it’s trying to give the general economy a chance to get healthier over the next 18 months.

Highlight from Interview – Has Pres. Obama spoken with the Speaker?

BLITZER:  When you say the president speaking to people on the Hill, is he speaking to the speaker of the House?

DALEY:  He’s not spoken to the speaker in a few days.  The truth is it looks as though the speaker is rather engaged in — in putting together his bill and getting the votes for his bill.  So when that’s put aside this evening, after it’s, I assume, passed in the House, and then defeated in the Senate, then I think there will be a whole new stage of the Senate and House having to come together to avoid August 2nd as being a day that has never happened in the U.S., and that is a day where we wouldn’t back up the full faith and credit of the United States.

Highlight from Interview – The President has a plan

BLITZER:  You say the president has put forward a plan.

BLITZER:  But the Congressional Budget Office says there is no plan that they can score because it’s just a framework, it’s just a speech.  They haven’t seen a document…

DALEY:  Well, Speaker Boehner knows — and Congressman Cantor knows the plan that they both worked on try to bring the debt down and get past this debt ceiling.  He does not have a legislative fix right now to this, because there’s a bill in the House and there’s a bill in the Senate and they will deal with those two bills.  He’s endorsed Senator Reid’s bill.  He feels very strongly that the bill that the House may pass tonight does not help the economy.

And what all of this should be about is trying to not only lower the debt, but at the same, get this cloud of uncertainty off our economy.

And the thought we’d be right back in the — this same thing in four-and-a-half months, with an economy that’s in a difficult shape with or without Washington’s craziness that goes on, is just unfathomable.

BLITZER:  So what you’re saying is the president did present a plan to the speaker, John Boehner.

So there’s no plan that’s out there, by any of these people who are saying this, that has any sort of chance of passing both houses and getting signed by the president.