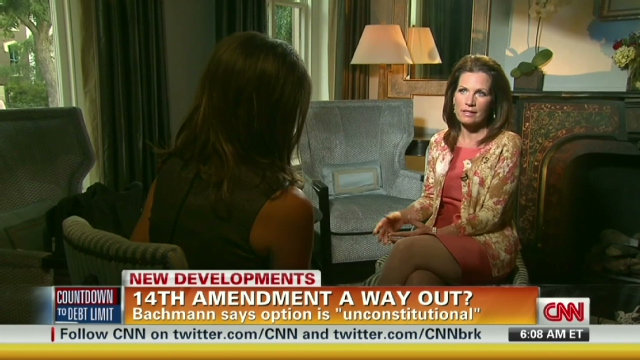 Bachmann: Obama ‘effectively a dictator’ if 14th Amendment is invoked

If President Obama invokes the 14th Amendment to raise the debt ceiling, he would “effectively be a dictator,” Republican Presidential candidate Rep. Michele Bachmann says in an exclusive interview with American Morning anchor Kiran Chetry.

“Congress has the power to lay and collect taxes,” Bachmann says. “It’s Congress that does the spending. The President is prohibited to do that. If he had the power to do that he would effectively be a dictator. There would be no reason for congress to even come into Washington DC. He would be making the spending decisions. He would be making the tax decisions. Clearly that’s unconstitutional.”