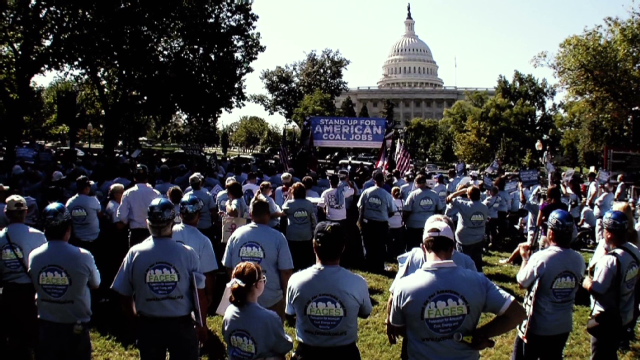 Sharples, West Virginia – population: around 100 people – is ground zero in the fight over an issue of importance to every American who has ever plugged in a computer, watched a television or taken a hot shower. Around 50 percent of electrical power in the United States is produced by coal. Across the nation, a schism that separates pro-coal and pro-environment movements over mountaintop removal, a destructive yet highly effective form of strip mining, is deepening.

CNN documents the intense struggle over mountaintop removal in Battle for Blair Mountain: Working in America, debuting on Sunday, August 14 at 8:00pm ET and PT, with a replay on Saturday, August 20. Anchor and Special Correspondent Soledad O’Brien examines the fight over Spruce One, one of the largest mountaintop removal sites ever proposed in the U.S. When O’Brien’s team first arrived in Sharples, W.V., nearly everyone in Appalachia was waiting to see if the Environmental Protection Agency was going to allow Spruce One’s permit to proceed, citing Clean Water Act violations.

Several groups were invested in the fight: coal miners who wanted to keep the jobs they’ve had for decades, the green activists who oppose all coal mining and a coalition of people who would like to see mountaintop removal replaced by less damaging mining practices. Influential people such as EPA Administrator Lisa Jackson, Senator Joseph Manchin (D-WV) and Robert Kennedy, Jr. had plenty to say about the outcome, too. O’Brien and her team tell the story from all sides.

“I see what’s down here and what’s down here is still beautiful, still pretty, clean,” Linda Dials says confidently. “I don’t have any problems what so ever with the water or anything else,” says the miner’s wife.

Linda and her husband James Dials have deep roots in the coalfields of southern West Virginia. James works in mountaintop removal and is proud of his job reconstructing mountains. He blames this fight on outsiders who simply don’t understand a coal miner’s way of life. Like most miners today, James and Linda feel under attack. They see efforts by environmentalists and the EPA to limit mountaintop removal as a threat to coal mining jobs everywhere. Linda is passionate and dedicated to protecting her community and their coal. With her husband’s job on the line, she finds herself on the frontlines of the fight as a coal activist.

On the other side of this battle is Billy Smutko, the son and grandson of a coal miner. He has lived in the same community as the Dials for his entire life. Although he never went into the mines himself, he knows the importance coal mining has had in building his area. However, he thinks mining can be done more responsibly. In his eyes, a job is temporary but the destruction mountaintop removal has wrought will be forever.

“… I am environmentally concerned for my children, and my grandchildren, and every generation after that,” Billy Smutko tells Soledad while surveying the aftermath of a mountaintop removal project. “It’s all about jobs right now. In two weeks we get a pay day,” he says mimicking the attitude of his neighbors. “In 30 years, what do you get?”

Chuck Keeney, a local community college professor, says he has witnessed the destruction that coal has brought to the lives of his students. An outspoken opponent of the influence of the coal industry in Appalachia, Chuck has made it his mission to save Blair Mountain from the bulldozers and blasts of mountaintop removal. Blair Mountain is across the valley from Spruce One. Chuck Keeney says he’s following in the footsteps of his great grandfather who led the original Battle for Blair in 1921 at time when miners were still fighting for a decent wage and a steady job.

Additional reporting on the mountaintop removal debate and video excerpts from The Battle for Blair Mountain: Working in America can be found at http://www.cnn.com/inamerica. CNN Student News is producing an Educator and Parent Guide for the documentary, which will include discussion questions and a learning activity. The guide will be available on http://www.CNNStudentNews.com prior to the debut of the documentary as a companion viewing aid and teaching tool.

Michelle Rozsa is the senior producer, Rob Howell is producer and Dave Timko is producer/editor for Battle for Blair Mountain: Working in America. Geraldine Moriba is the executive producer for CNN’s In America unit.