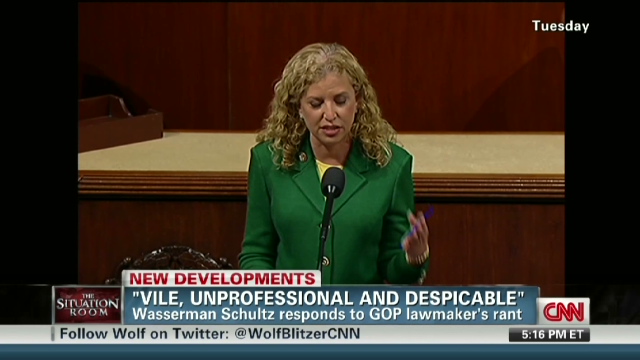 Rep. Debbie Wasserman Schultz (D-FL) tells CNN’s Wolf Blitzer that Rep. Allen West (R-FL) has not apologized for his rant on Wasserman Schultz. A highlight from the interview is after the jump and a full transcript will be posted on CNN.com.

WOLF BLITZER, HOST, CNN’S “THE SITUATION ROOM”:All right.  Let’s talk about this little fight you’ve had with Congressman Alan West who — he represents a district just north of yours in south Florida; he’s a Republican.  You were on the House floor and you said this, and I’ll play the clip of what you said.

REP. DEBBIE WASSERMAN SCHULTZ (D-FL), CHAIR, DEMOCRATIC NATIONAL COMMITTEE: Incredulously, the gentleman from Florida who represents thousands of Medicare beneficiaries, as do I, is supportive this plan that would increase costs for Medicare beneficiaries.  Unbelievable from a member from south Florida.

BLITZER:  All right, to which he sent a letter to you and copied the Republican leadership, and it’s blistering.

He says, “Look, Debbie, I understand that after I departed the House floor, you directed your floor speech comments directly towards me.

“Let me make myself perfectly clear, you want a personal fight, I am happy to oblige.  You are the most vile, unprofessional and despicable member of the United States House of Representatives.  If you have something to say to me, stop being a coward and say it to my face, otherwise, shut the heck up.  Focus on your own Congressional district.”

“I am bringing your actions today to our majority leader and majority whip and from this time forward, understand that I shall defend myself forthright against your heinous, characterless behavior…which dates back to the disgusting protest you ordered at my campaign headquarters October 2010 in Deerfield Beach.  You have proven repeatedly you are not a lady, therefore, shall not be afforded due respect from me.

Wow.  Have you ever been attacked publicly like that?

SCHULTZ:  No, and I was surprised that he sent that to my personal e-mail, an e-mail that he didn’t previously have.

But it’s — you know, it doesn’t faze me.  I mean, it isn’t surprising he would react to the probably untold pressure he’s getting from his constituents.

I mean, he and I both represent, as I pointed out in debate on the House floor, represent thousands of senior citizens who under this cut, cap and balance — really, duck dodge and dismantle — plan that the Republicans have proposed would face huge increases in their Medicare costs.  It would end Medicare as we know it.  It’s the Ryan plan on steroids.  And he clearly is feeling the pressure.

If he can’t handle that pressure, can’t handle being called out in debate on the House floor, then he probably should change his position.

And, you know, he also suggested that I focus on my own congressional district.  I’ll point out that I was.  He’s a constituent of mine, and so I was dutifully doing my job and representing my constituents and taking to task someone who I think is really taking the wrong position when it comes to the people we represent in south Florida who badly need that safety net and make sure that we’re not going to dramatically increase their costs, which that cut, cap and balance plan does.

BLITZER:  So you’re saying he lives in your district, he doesn’t live in his own district?

SCHULTZ:  Yes, Congressman West is a constituent of the 20th congressional district, but represents the 22cd.

BLITZER:  Now there’s reports out there as of this moment that he called you and apologized.

SCHULTZ:  That is absolutely untrue.  I have not received an apology.  I haven’t received a phone call.  I know he has my e-mail, I haven’t got an apology on my e-mail nor on my fax machine in my district office or my congressional office in the Capitol or at the Democratic National Committee.

BLITZER:  He’s quoted in this roll call as having told a “Huffington Post” reporter, I just apologized.

BLITZER:  If he does call you and say I’m sorry, what will you say?

SCHULTZ:  Well, I would appreciate his apology, and I would hope that he would reconsider his ill-advised position on increasing benefits — increasing costs for Medicare beneficiaries.

But I think Congressman West really needs to understand that when we’re debating on the House floor, that’s what we do.  We engage in a back and forth.  And if he can’t handle that, particularly on an issue as important to our constituents as Medicare, then he probably needs to reconsider his really ill-advised position on Medicare.

BLITZER:  Obviously a lot of hard feelings there with the congressman.

By the way, we invited him to come into THE SITUATION ROOM today like you, and his office told us he couldn’t do it, he didn’t want to do it today.  But he has an open invitation to come in if he wants to come in.

SCHULTZ:  But, Wolf, understand, the hard feelings are one way.  I simply debated a policy issue on the House floor.  He had spoken directly before me and I got a tirade in response out of the clear blue sky.  It was really unfortunate.