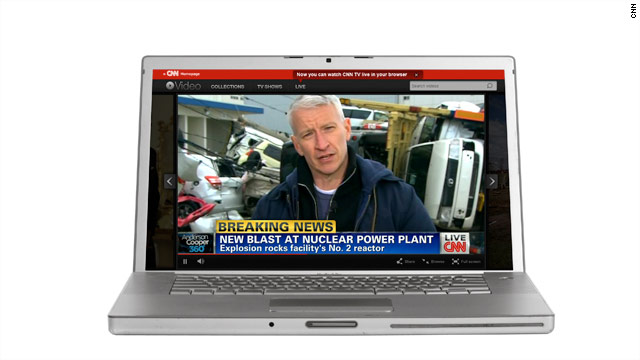 CNN and HLN’s complete 24-hour television networks will be streamed live on CNN.com, the CNN App  for  iPad and the CNN App for iPhone and iPod touch beginning today, July 18.   CNN Worldwide is the first news organization to stream its linear television channels online and on mobile devices to consumers who subscribe to a multi-channel video service.  Simultaneous to this launch, CNN.com has debuted its new video experience, which seamlessly integrates live network TV into a larger and higher-quality video player, capable of delivering HD quality.

“A principal goal for CNN is to make more of our content available to more people on more platforms, and CNN’s participation in the TV Everywhere initiative is another step forward in that effort,” said Jim Walton, President of CNN Worldwide.  “We have long believed that our growth depends on keeping CNN essential and relevant to consumers wherever they are.”

To access CNN and HLN online, users can go to www.cnn.com/video, click on the “Live” tab and log-in through their cable, satellite or telco provider with a username and password.

“CNN is taking a significant step forward by offering live CNN and HLN TV to our audiences whether they are on their couches at home or have their toes in the sand on the beach,” said  KC Estenson, general manager of CNN Digital. “The 10 million users who have downloaded CNN’s mobile apps and the tens of millions of people who get the latest news and information from CNN.com every day will soon be able to watch CNN TV on every device they have.”

CNN.com’s new video experience offers a cinematic player that optimizes the video quality for a user based on their Internet connection, with the capability of delivering HD quality.  Video can be “squeezed back” to allow a user to browse through curated CNN video collections and TV show clips without leaving the video experience.

In addition to the live streams of CNN’s networks, the video experience will continue to offer up to four live streams of breaking news and events, original video series and on-demand video clips with related CNN and HLN show information.

The CNN App for iPad and CNN App for iPhone and iPod touch are available for free from the App Store or at www.itunes.com/appstore.

CNN live on the Web

CNN live on the iPad

CNN live on the iPhone