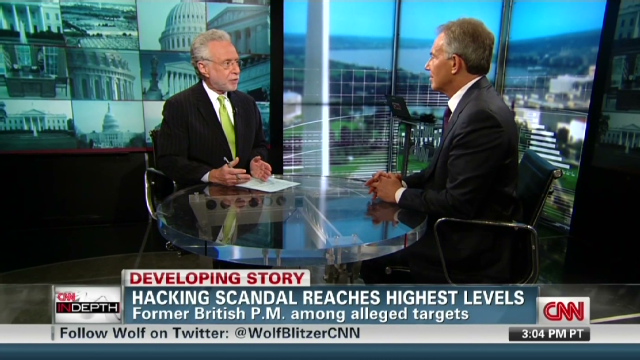 WOLF BLITZER, CNN ANCHOR, THE SITUATION ROOM: Let’s – let’s talk a little bit about the scandal in England right now. It’s shocking to me. I’ve read those tabloids. Did you have any idea “A” as prime minister, and “B” since you left office of the enormity of what’s going on. They seem like a bunch of gangsters over there.

TONY BLAIR, FORMER PRIME MINISTER: Well, I mean, there’s also some very good journalists out – out in the U.K. as well. So, you know, one – one shouldn’t take this as meaning that all of British journalists…

BLITZER: I’m not saying all of British journalism is like that.

BLITZER: But that the – the excesses that we’re reading about, and I mean, did – were you stunned by this?

BLAIR: You know, if I’m absolutely frank about it, I – I think most – we – we’ve learned to live with a certain standard of behavior. And I think the reason why it’s important now as a result of what has happened to open the whole thing up. And there’s going to be a – an inquiry in which we can look at the relationship between, you know, the media and people in public life, and politics, and so on.

I think there’s a whole set of aspects of this that need to be looked at – should be looked at. Because in the end you – you want a free and vibrant press. And it’s a vital part of a democracy. But I think what is really – certainly has shocked the British people actually has – has been the – the absence of just basic standards in the way things are done. And…

BLITZER: Cause when you say – it doesn’t look like there are any standards. I mean, they – they would intimidate politicians in an – in a horrendous way some of these excesses. You understand that?

BLAIR: Well, I – you know, I’ve – I’ve got pretty long experience in dealing with…

BLITZER: Did they intimidate you?

BLAIR: I don’t know about intimidate me, but if you were caught up in a media storm, you certainly knew you were in it.

BLITZER: I mean, did you know how powerful, you know, these tabloids were in terms of trying to scare politicians. And – and warning them if you didn’t do what they wanted, they were going to go after you?

BLAIR: Well, the – the media is very powerful in the U.K. The media is powerful everywhere. And one of the things I think that any sensible investigation of this has got to look at, and try to do it dispassionately – you know, the politicians have got their point of view. The media have got their point of view. There’s always going to be an uneasy relationship between the two. There will be here. Never mind back in the U.K.

But what is important is to realize that in a world of 24 a day 7 day a week media with all the new technology and so on, and with the huge competitiveness there is in – in the British media, people desperately get their stories, and – and, you know, get ahead of the – the competition. Unless you have some sort of framework within which people agree to operate, and everyone acknowledges that and abides by it, then – then you – you do get a pretty ugly situation.

BLAIR: You know, I’ve lived with it for kind of 50 years at the top of politics full of – and one of the things I think it’s – it’s important in this since, you know, it’s important to say this. Politicians are always going to think the media are out to get them. Okay? So you’ve got to leave all that to one side, even within myself.

And in addition, people are entitled to their views about political leaders. And they’re entitled to dislike me, or my wife, or anyone else. I think what is important is to realize this is not about one group of newspapers, or one part of the media, or one type of procedure. Whether it – you know, in this case hacking. It – it’s about a whole range of things that need to be looked at so that we – we understand what’s acceptable and what isn’t acceptable.

Because in a way, you know, what I was trying to say to you earlier was that I think as a result of this over the years, you know, you tolerated what in a sense is intolerable. But you did it because look, when you’re the prime minister you’re running a country. This go out there every day and start complaining about the media, you know, the public say, “Well, that’s bad. But get on with your job.

So in a way it’s – it’s difficult for an existing prime minister, an existing political leader, you know, someone who’s actually in office to have this type of debate. But I think now that this has happened, it may be the thing that in a curious way gives us the opportunity to get a more healthy relationship.

And – and where the types of standards that – that you guys I think probably do have here or some understand are – are better assimilated and regarded as – as natural and normal back hope.