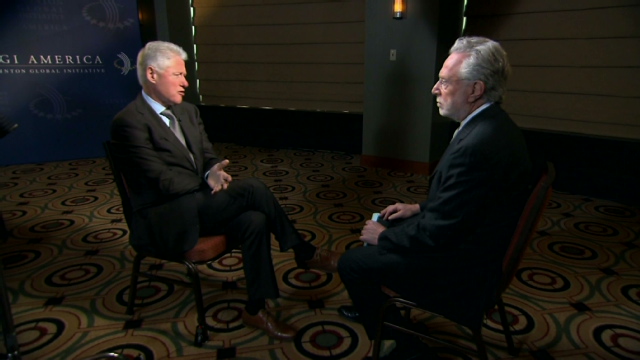 Today in Chicago, CNN’s Wolf Blitzer sat down with former President Bill Clinton to discuss the Clinton Global Initiative, 2012 politics, Libya, domestic job creation and more. Two highlights from the interview are after the jump and a full transcript of The Situation Room with Wolf Blitzer will be posted at CNN.com.

Highlight from Interview- President Obama’s reelection chances
THIS IS A RUSH FDCH TRANSCRIPT. THIS COPY MAY NOT BE IN ITS FINAL FORM AND MAY BE UPDATED.

WOLF BLITZER, HOST:  How worried are you, right now, about President Obama getting reelected?

BILL CLINTON, FORMER PRESIDENT OF THE UNITED STATES:  Well, on today’s facts, I’ll be surprised if he’s not reelected.  I think people understand this recession was more severe than the one I had.  And if you just look at what’s going on in Michigan, a terrible year for the Democrats in Michigan in 2010.  But the United States on the day Barack Obama became president had two percent of the world’s market for these high percentage, high powered batteries, to make hybrid and all-electric vehicles.

Today we have 20 percent of the world market because of incentives he put in and pushed and aggressively sought.  We have over 30 new battery factories, 18 of them in Michigan, built or under construction.  I could give you other examples like that where we’re trying to build a competitive economy, where they’re going forward.  I think he’s got a good story to tell.

WOLF BLITZER, HOST: Who’s the strongest Republican candidate out there?

BILL CLINTON, FORMER PRESIDENT OF THE UNITED STATES:  I can’t tell yet.

BLITZER:  Who do you fear the most?

CLINTON:  Oh, I’m not afraid — I’ll be surprised if the president doesn’t win.  I think he will.   But, you know, as you might imagine, as a Democrat who’s — I’ve always touted myself is the pro-growth, pro-business, pro-labor Democrat.  I like Governor Huntsman, I like Governor Romney.  I think Governor Romney is doing a better job this time than he did last time.  He’s more comfortable and he seems to be willing to take some of the heat you get if you stand up to people in your own party that you think, in his case, too far to the right.

But I don’t know who’s going to win.  I think, I’m not surprised that Congresswoman Bachmann is off to a good start because I think she’s a compelling public figure and she comes — I don’t agree with her on a lot of things but I think she comes across as real, you know.  And they got some other candidates that are quite good.  I just — I don’t think we can tell yet.  We just got to let it play out.