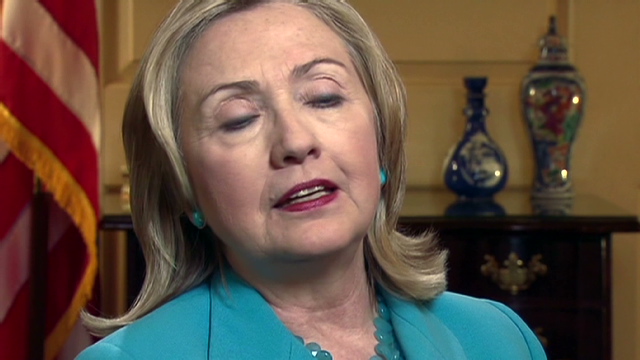 Full transcript, embeddable video clips and image after the jump.

Full transcript:
JIM CLANCY, CNN HOST:  Protection, partnership, all of those things are really important, but Hillary Clinton, you bring action to this.  How and what – how do you get others to share?

HILLARY CLINTON, U.S. SECRETARY OF STATE:  Well, Jim, I have been caring about and working on this now for longer than a decade, and the passion is there because it’s such a violation of human rights and  human dignity.  To see men, women, and children forced into bondage, slavery, in the 21st century is just absolutely unforgettable and unforgivable.  So we do take seriously the mission that the United States, along with many international partners, has undertaken, which is to prevent and to prosecute and to do everything we can in our efforts to stop modern-day slavery.  And that means we have to have partnerships, which is very important, and we have to protect those who are at risk and those who are put into it.  So we went from three Ps to four Ps, but passion underlies all of them.

CLANCY:  When the United States took it upon itself through the Trafficking Victims Protection Act to do a report like this, when it also set itself up for criticism by those who would say, “This is politicized,” how tough do you see this year’s report in comparison to others?

SECRETARY CLINTON:  It’s both tough and it’s encouraging, because on the one hand, when we started, we couldn’t even get this issue on agendas with other countries.  I remember back in the late 90s, as First Lady, raising this issue in a number of countries, and I was really just politely dismissed.  It was not something they wanted to talk about; they weren’t going to do anything about it; they viewed it as cultural, not criminal.  And it only has been in the last several years that we have seen in – I would argue, in some measure, because of the U.S. report – that countries take it seriously, and that we have made common cause with activists at the grassroots level in so many countries who use this report to push their own governments for greater commitment.

CLANCY:  Some governments like Saudi Arabia remain right on the bottom.  Kuwait this year went down to Tier 3.  When you look at that – how do you engage diplomatically to tell people who won’t even recognize that they have a problem, how do you engage them to make a change, a real change, not just passing a law?

We try to use this report to encourage change.  I mean, the report in and of itself is a tool.  It’s not an end in itself.  It’s not some kind of giant report card and then we put it away and then dust it off and upgrade it the next year.  All through the year, what we’re trying to do is to work with countries that are willing to take some action.  We’re trying to work with advocates so that they know they’re not alone.  And we’re trying to shine a very bright light on people everywhere who are still unwilling to admit that 27 million enslaved people is a rebut to everyone everywhere; it’s not just a Western phenomena.  I think human rights are universal rights, and therefore, we have to keep working with these countries and encouraging them, and frankly, naming and shaming to some extent to get them to change.

CLANCY:  Does naming and shaming – do you think it works?

CLANCY:  But some countries are down on the bottom, Tier 3, every year.

SECRETARY CLINTON:  Well, we can look at the glass as half empty or half full, and that’s true that some countries are on the bottom, but other —

CLANCY:  Are we pushing them hard enough or is this something where, “They’re our friends, we don’t want to push too hard?”

SECRETARY CLINTON:  Well, we push pretty hard.  I mean, it’s pretty hard to turn your eyes away from a report that is on the internet and that everybody can access.  But I also like to look at the countries that have made a lot of progress.  Look at what the Philippines have done in a change of administration.  The Philippines probably export more people of their citizenry than nearly any other country in the world.  They go all over the world to work in many different settings.  And until the new administration of President Aquino, we didn’t really have the level of commitment we were seeking.  We do now, and we see a sea change of difference.

CLANCY:  One thing that has changed is that the U.S. is coming under a spotlight.  The U.S. has said if:  We have a problem, we admit it.  But when you look at the War on Drugs or the War on Terror, there is no commensurate war on human trafficking in this country, a country with a hundred thousand young girls out on the streets, could become victims of human traffickers right here in this country – the funding isn’t there.

SECRETARY CLINTON:  Jim, I don’t accept the premise of that.  I think that part of the reason why I wanted to include ourselves in this report is that, I think, we’re stronger diplomatically if we can say to countries, look, we’re taking a hard look at ourselves.  Now, we have done so much in the last 10-plus years, and a lot of what we do is at the local and state level, not just at the federal level.  So if you look at all of the resources, from DA offices and police stations to judges who have been trained and really sensitized, all the way across our country we are making enormous progress off a very high base to begin with.

One of the first things I ever did that had anything to do with politics was as a young intern when I was in law school working on forced labor in our – our migratory labor in fields in our country, where people were basically enslaved.  They were given contracts that they would never be able to fulfill and they were kept in, really, substandard housing, denied all kinds of services, and this was nearly 40 years ago.  And there’s just no difference; it’s night and day.  Our country has done so much.  It is a national priority.

Once a year, I hold a meeting where our entire government comes together, from the Defense Department to the Justice Department to the Labor Department, and we do a tough review on what we’ve done and what we can do better.  But what we have accomplished is really extraordinary.  Is it a problem that we have overcome?  No, but nowhere in the world has, but we set a very high standard and I’m proud of the work that our country is doing.

CLANCY: I want to shift gears and just ask you a question about Libya, Moammar Gadhafi, and the International Criminal Court:  Is it such a good idea to have a public indictment of a man that you’re trying to force from power, or is it only going to make him dig in his heels even more – to fight his own people, to take their lives to an even greater degree?

SECRETARY CLINTON:  Well, Jim, that’s a judgment call.  The international community at the United Nations included a referral to the International Criminal Court because of the credible evidence of behaviors that were deeply disturbing.  He’s dug in pretty hard, and we, along with our international partners have made it very clear that he needs to leave power, and he also needs to stop the assault on his own people.  But part of what the International Criminal Court has done is to take credible evidence and pull it all together.  And it tells a fairly horrifying story about what he and his close associates, including family members, have been willing to do to stay in power, someone who’s been in power for more than 40 years, who cannot give it up, and who has so undermined the institutions of a country that has so much potential.  So you can argue it round, you can argue square, you can say maybe we should have or maybe we shouldn’t have.  But it was included in part of the international response to what we saw as a very direct threat to the lives of civilians in Libya.

CLANCY:  Secretary of State Hillary Clinton, thank you very much for giving us the time.

SECRETARY CLINTON:  Thank you, Jim.  Good to see you.

CLANCY: Good to see you.

SECRETARY CLINTON:  I appreciate it.  Thank you very much. 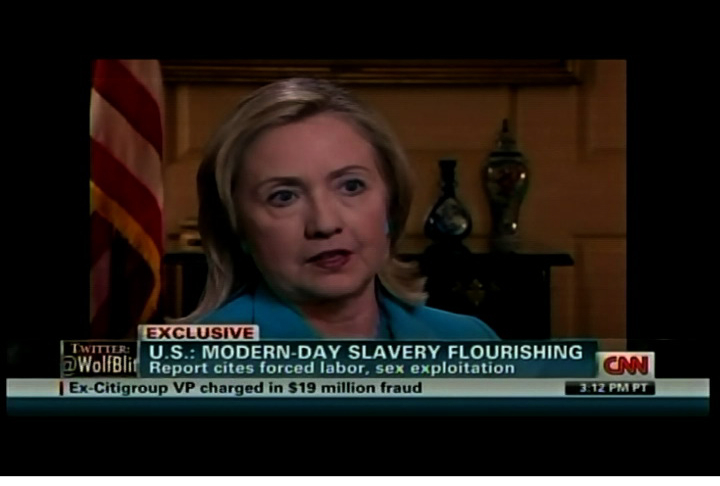