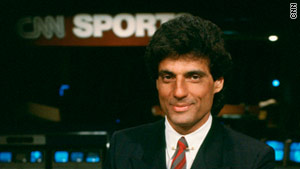 Nick Charles, who started off as a taxi driver and later became the first sports anchor at CNN, died Saturday after battling bladder cancer since 2009. He was 64.

“As a journalist and sports personality, Nick Charles helped put CNN on the map in its early days.  He brought intelligence, style and heart to his work–qualities that translated to our company and inspired those of us who were fortunate to work alongside him.  His passing is a loss to CNN, to the sports world and to the fans and friends everywhere who were with him to the end of his extraordinary life.  Like them, our thoughts today are of Nick and with his family.”