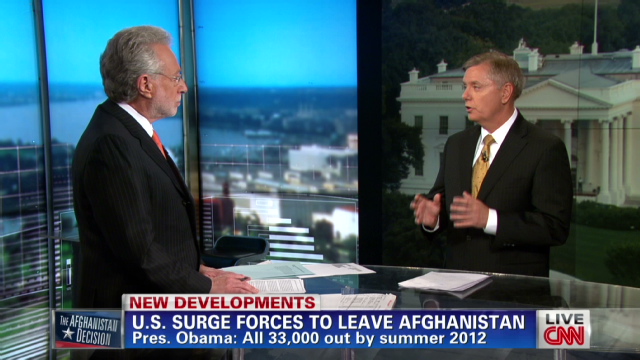 CNN’s Wolf Blitzer spoke with Sen. Lindsey Graham (R-SC) after President Obama’s Afghanistan address.  Two highlights from the full interview are after the jump and a full transcript will be posted at CNN.com.

Please credit all usage of the interview to CNN

SEN. LINDSEY GRAHAM (R), SOUTH CAROLINA:  Well, I liked the idea that we may have an enduring relationship past 2014, where we have American air bases, joint bases,that can make sure the Taliban never come back.  But–

BLITZER:  Did you hear him say that all U.S. troops would be out of Afghanistan by the end of 2014?

GRAHAM:  Here’s what I think the story is.  Petraeus loses, Biden wins.  And I respect the vice president, but I think we have undercut a strategy that was working.  I think the 10,000 troops leaving this year is going to make this fighting season more difficult.  Having all of the surge forces leave by next summer is going to compromise next summer’s fighting season.

GRAHAM:  But I think we’re creating momentum to undercut the counterinsurgency strategy, and we’re going to counterterrorism strategy too soon.  And here’s what I worry.  Will our allies follow suit?  Will they say America is leaving in large numbers by next summer, will they accelerate their footprint in terms of leaving?  Will Republicans say I had a lot of confidence in General Petraeus’s plan, but this adjustment in my view makes General Petraeus’s original plan harder to achieve, unnecessarily risky, and will they say if we’re going to not be successful, let’s end it sooner.

WOLF BLITZER, CNN ANCHOR:  He’s saying another half a trillion dollars between now and the end of 2014.  Is that money well spent by U.S. taxpayers?

SEN. LINDSEY GRAHAM (R), SOUTH CAROLINA:  After the Russians left Afghanistan, the Taliban took over. They took women in soccer stadiums and killed them for sport.  They invited bin Laden as the honored guest and we looked the other way.

They blew up statues of Buddha figures.  And out of that, 20 hijackers were given less than $1 million to kill 3,000 Americans.  How much money have we spent since 9/11–

BLITZER:  You don’t think that Hamid Karzai, the democratically elected president of Afghanistan, and his 300 military and police forces are capable of preventing that scenario from recurring?

GRAHAM:  I think General Petraeus had a strategy of transition that made sense to me.  I think the president rejected a modest withdrawal in 2011, that he’s accelerated withdrawal in 2011 and ’12 that could compromise our ability to maintain the gains we have fought so hard.

The Afghan security forces are better, but not yet able to sustain the fight without our help.  NATO allies are more likely to leave at a faster pace now.  Republicans may look at this as a rejection of Petraeus.  And at the end of the day, no politician in this country — as much as I respect Joe Biden and President Obama — has it right in terms of Afghanistan.