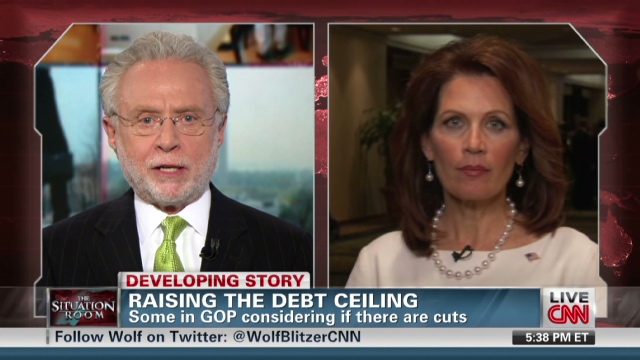 Bachmann a “no” on debt ceiling vote

GOP 2012 presidential candidate Rep. Michele Bachmann (R-MN) discusses the debt ceiling and “Obamacare” with CNN’s Wolf Blitzer. A full transcript of the interview is at CNN.com. A highlight from the interview is after the jump.

WOLF BLITZER, CNN ANCHOR:  All right.  Let’s talk about issue number one, the economy, right now, and the debt ceiling.  Are you opposed to raising the debt ceiling around any circumstances whatsoever, even if the president agrees to major cuts in spending?

REP. MICHELE BACHMANN (R-MN), PRESIDENTIAL CANDIDATE:  Well, we’d have to see serious cuts.  I’d like the president to start, first of all, with repealing the spending on Obamacare.  That’s $105 billion.

And so I would like to see the president start there and make steer serious cuts, because today, out of every dollar the federal government spends, 42 cents of that dollar is borrowed money.  We just can’t do that anymore, because in the very brief time President Obama has been in office, we’ve seen a 35 percent increase in the debt and we’ve also seen a 14 percent decline in the value of the dollar.  So we really need to have a severe change, we can’t go with business as usual in Washington anymore.

BLITZER:  So what I hear you saying is that under some circumstances, unlike, for example, Senator Rand Paul or Congressman Ron Paul, under some circumstances, if the White House gets a compromised agreement with Mitch McConnell and John Boehner and Eric Cantor, that you would vote yea, you would vote yes in favor of raising that debt ceiling limit?

BLITZER:  What if they reach a compromise, though?  What if the Republican leadership works out a compromise with the president and they recommend a yes vote?  Would you go ahead and join them?

BLITZER:  All right.  So I see a difference between you and Ron and Rand Paul, for example, because they’re saying they won’t vote to raise the debt ceiling under any circumstances.

BACHMANN:  Well, I think it’s highly unlikely, Wolf, that we’re actually going to get the kind of serious cuts that I’m looking for.  So that’s why I am a no vote.