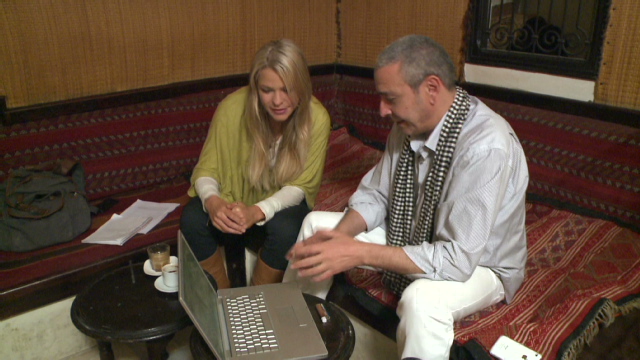 CNN correspondent Amber Lyon reports from the digital edges of the democratic revolutions in Tunisia, Egypt, and Bahrain on the movements spreading through North Africa and the Middle East.  Using computers and cell phones, and social media like YouTube, Twitter and Facebook, young citizen journalists have leveraged the technology of the Internet to call out injustices, demand democratic change, organize protests, and share news about how to evade authorities desperately trying to contain the spread of revolution.

Though the historic changes sweeping the Middle East and North Africa have been collectively dubbed the “Facebook revolution,” Lyon reports how the digital roots of reform were actually sown years before the extraordinary street demonstrations of 2010 and 2011.  Riadh Guerfali, whose online handle is “Astrubal,” is one of the founders of Nawaat, a crowd-sourced digital newspaper in Tunisia.  In 2007, he launched a salvo with his exposé about the misuse of the president’s official airplane.  His site was banned by the Tunisian government within days of its launch.  Later, Astrubal created TuniLeaks, a website hosting the first set of WikiLeaks releases.  The revelation that even the U.S. government suspected rampant corruption within the Tunisian regime, spawned even more outrage that ultimately led to President Ben Ali’s resignation.

From Tunisia, Lyon’s team travels to Cairo to report on activists Gigi Ibrahim and Mona Seif who are using the Internet to hold the new Egyptian government accountable for its actions, including allegations of torture.  They take Lyon to the streets of Tahrir Square where activists use Twitter to battle alleged government enforcers.  “Piggipedia” is a rogue’s gallery photo-sharing website used by Egyptian protestors to post the identities of authorities reported to have harassed demonstrators; the “Tahrir Diaries” serves as a digital blog that captures the testimony of protestors who report being emotionally, physically, and sexually tortured by authorities.

A spokesman responded to Lyon’s inquiries about the allegations of abuse with the following official denial:

“These cases of torture are false rumors.  None of these accounts are true.  We are in unstable times in Egypt; there are thugs loose.”  Later though, Egyptian authorities admitted that virginity tests were conducted on female protestors in order to refute allegations that they were raped while held in captivity.

Lyon next travels to Bahrain where she searches for the founder of Bahrain Online, a ‘digital coffeeshop’ for political dialogue.  For years the blog was thought to be edited by a team of underground bloggers, but the site was managed by a lone Bahraini airline engineer, Ali Abdulemam.  Just prior to his planned interview with CNN’s iRevolution team, government forces raided his home and he disappeared.  Nabeel Rajab, a human rights activist agitating for Abduleman’s innocence, himself was arrested.  When Lyon asks Rajab’s young son what he did when their home was raided and his father was arrested he replies, “I put it on Facebook.”

Later, Lyon and her crew were detained during the reporting of this documentary.

“About 20 men wearing black ski masks, some in civilian clothing, pointed machine guns at us,” says Lyon.  A six-hour detention followed, and authorities confiscated and erased their videotape.

Bahraini Foreign Minister Khaled bin Ahmed al-Khalifa says, “It (the detention of the CNN crew) had to be done,” he says.  “Nowadays,” he continues, “during this period of restoring law and order, this is the way that protects everyone – including your team,” he says.  Masked armed authorities may be unusual he agrees, but he argues: “It’s unusual, because the whole situation around us in Bahrain is unusual.  We have never seen this before in our lifetime.”

Online via www.cnn.com, users wanting more information about the digitally-fueled revolutions in Tunisia, Egypt, Bahrain, Syria, Libya, Yemen, and more will find video profiles of some of the most active “web warriors” of the Arab world.  Blog postings and moving images from protests throughout North Africa and the Middle East are featured in an online gallery with video excerpts from the documentary.