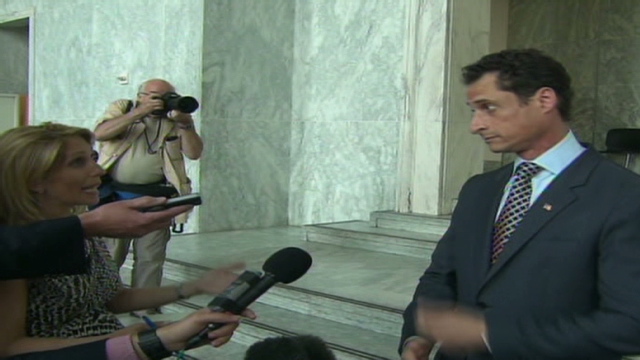 Rep. Anthony Weiner (D-NY) tells CNN he will no longer discuss a controversy surrounding a lewd photo sent from his Twitter account. Read a full transcript of the exchange at CNN.com.  A highlight is after the jump.

DANA BASH, CNN SENIOR CONGRESSIONAL CORRESPONDENT:  Congressman, could you just ask — answer point blank, you say that you were hacked, which is potentially a crime. So why haven’t you asked the Capitol Police for any law enforcement to investigate?

REP. ANTHONY WEINER (D), NEW YORK:   Look, this was a prank that I’ve now been talking about for a couple of days.  I am not going to allow it to decide what I talk about for the next week or the next two weeks.  And so I’m not going to be giving you anything more about that today.  I think I’ve been pretty responsive to you in the past.

BASH:  But — but with respect, you’re here, which we — which we appreciate, but you’re not answering the questions. Can you just say why you haven’t asked law enforcement to investigate what you are alleging is a crime?

WEINER:  You — you know, Dana, if I was giving a speech to 45,000 people and someone in the back of the room threw a pie or yelled out an insult, would I spent the next two hours responding to that? No.