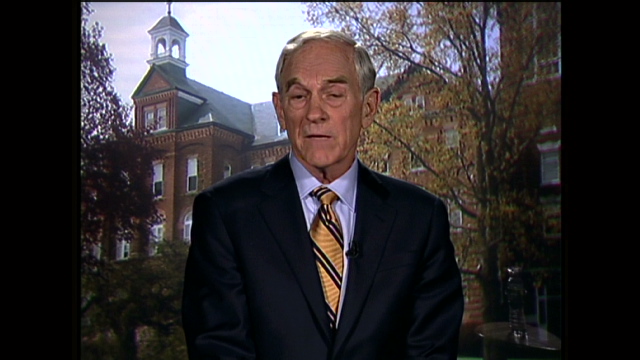 WOLF BLITZER, HOST: On the whole issue of FEMA, the Federal Emergency Management Agency, do you want to see that agency ended?

Why should people like myself, who had, not too long ago, a house on the Gulf Coast and it’s — it’s expensive there and it’s risky and it’s dangerous.

Why should somebody from the central part of the United States rebuild my house? Why shouldn’t I have to buy my own insurance and protect about the potential dangers?

Well, the reason we don’t have market insurance is it’s too expensive. Well, why is it expensive? Because it’s dangerous. Well, so why should — why should we take money from somebody else who don’t get the chance to live on the Gulf and make them pay to rebuild my house?

I mean it’s — it’s a moral hazard to say that government is always going to take care of us when we do dumb things.  I’m trying to get people to not to dumb things.  Besides, it’s not authorized in the constitution.

BLITZER:  And if there’s a disaster, like flooding or — or an earthquake or Hurricane Katrina, what’s wrong with asking fellow Americans to help their — their — their fellow citizens?

PAUL:  Nothing.  And I think Americans are very, very generous and they have traditionally.  The big problem is Americans are getting poor and they’re not able to voluntarily come to the rescue.

But to coerce people, to ask them to help, that is fine and dandy.  But when you bankrupt our country and nobody has a job and then they say, well, FEMA needs to bail out everybody, then all we’re doing is compounding our problems.

And believe me, I’ve been, you know, very much involved in the hurricanes that have come into my district.  And most of the people in my district do not like FEMA.  You know, they want to try to get their money and all.  But FEMA comes in and takes over.

They take over their property rights.  They dictate.  They prevent some of the volunteers from going in.

So there’s a strong resentment toward the way FEMA operates, because they’re bureaucrats who don’t understand the rule of law nor do they understand local control and property rights. So there’s — there’s a very strong argument that this whole program, that governance through coercion and taxation, can bail out everybody when we’re flat broke and they have to print the money.  And now we’re