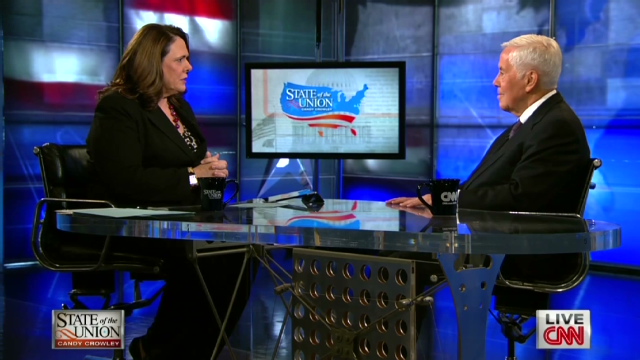 Sen. Lugar talks Afghanistan draw down on State of the Union

EMBEDDABLE VIDEO: Senator Lugar on State of the Union

Highlighted excerpt after the jump.

Senator Lugar on drawing down troops in Afghanistan:

CROWLEY: You have repeatedly said that the administration doesn’t seem to have a clear cut vision of victory when it comes to Afghanistan, hinting that it’s now about time that we begin to withdraw, at least. And that this is probably further evidence. We now have the head of al Qaeda, the whole reason we went to Afghanistan was that it was a safe place for people like bin Laden.

When you see that we are going to begin a drawdown in July, what size of a drawdown are you looking for? What would satisfy you at this point?

LUGAR: Well, I would look, first of all, as to whether our strategy of getting Afghan forces in preparation to defend Afghan cities and provinces is coming along. The Soviet Union tried this and had quite a bit of success for quite a while but never quite brought it off. And, as a matter of fact, at the end of the day, the people they had trained and were loyal to them deserted and went to either the Taliban or elsewhere.

Now in our situation, we had a test this week in Kandahar. The Taliban simply going to attack, they did. The Afghan forces apparently resisted successfully their attack in Kandahar, very important.

My point in the hearings we had this week was to pick up on words of one of our fine testifiers that — that perhaps 10,000 to 25,000 troops after 18 months or so would satisfy our ability to fight terror, that is, with intelligence backing, with very resourceful people that can make attacks in various areas. We might be able to get the job done for a great deal less money.

Now why would I consider that? Because in the front room we discuss money every day. We discuss the debt of our nation and the catastrophic situation fiscally, but in the back room we talk about foreign policy as if there was nothing in relationship to this. There is a big relationship. We are overstretched in terms of our defense budget and our military, so we’re going to have think very carefully about our objectives.

I would like to see the administration define this much more precisely as opposed to the fact that we’re simply going to have a general review and 2014 is out there in some fashion, And many members of Congress think that won’t be the end of it. We’ll be supporting the Afghan army indefinitely on our budget, on our time.