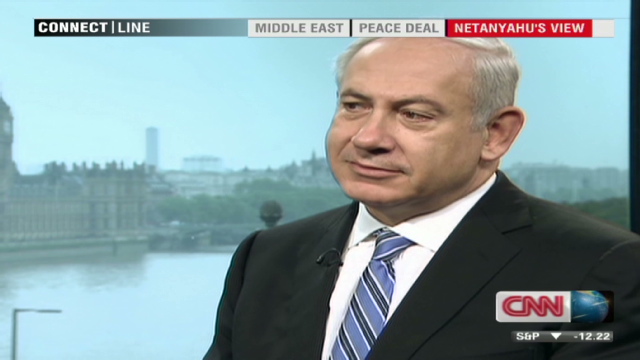 — The “butchering” of civilians inSyria”must stop,” he says

— If Irangets nuclear weapons, “it will change history,” he warns

*** MANDATORY CREDIT FOR ANY USE: CNN

BENJAMIN NETANYAHU, ISRAELI PRIME MINISTER:  No, it weakens extremists.  When the world’s number one terrorist, a man who’s responsible for the death of thousands of innocent people is brought to justice and is eliminated, it tells terrorists everywhere there’s a price and you will pay it and that’s good.

VERJEE:  Was President Obama right not to release the photo?

NETANYAHU:  He probably has his reasons.  I haven’t seen the photos but I think it’s immaterial.  I don’t think that anyone really questions the fact that Osama bin Laden has been killed.  I think that’s a safe fact.

VERJEE:  Who would you consider today, the world’s most dangerous man, the biggest threat to the world’s security after bin Laden?

VERJEE:  Do you think Ahmadinejad is the biggest threat?

NETANYAHU:  I think he’s a big threat.  I think his boss, Khamenei is a bigger threat.  Iran is the country and he’s infused with fanaticism — he wants to get the whole lot – he calls us Israel, “the little Satan” because America is “the great Satan” and I hope that Europe and Britain aren’t offended because they’re a middle-sized Satan.  So all these Satans have to be eliminated and, if necessary, they’re developing atomic bombs for that effect.

VERJEE:  So why haven’t you taken action, a targeted action against Iran if you’re convinced it needs to be eliminated?

NETANYAHU:  Well, because one of the things that we’ve looked at is the leadership of the international community, led by the United States, to force that regime to stop its nuclear bombs program.  I think the sanctions might work if the international community makes it clear that there’s a credible military option if the sanctions don’t work.  And I think that the coupling of those two things — economic sanctions and a military option if sanctions don’t work — that’s the only thing that will make this regime stop.  And I hope to see that determination in place.

VERJEE:  There’s a government now that represents all Palestinians in a unity government.  Why won’t you accept that?

NETANYAHU:  Well, I’d be the first one to champion and to applaud national unity amid the Palestinians for peace.  But what we have is not a union for peace.  What we have is a pact with Hamas who calls for the eradication of Israel, the opposite of peace.  And the Hamas since the signing it, of this unity agreement has not said, well, we accept Israel, we’re going to dismantle the terrorist apparatus, we’re going to stop firing rockets –in fact they’ve said the very opposite

VERJEE:  Before you were complaining that the Palestinians didn’t have unity, that Mahmoud Abbas was weak.  Now you actually have a unity government and you don’t see any opportunity here at all?

NETANYAHU:  Actually I said the opposite.  In fact, they stated I said it.  I said the very opposite.  I said to Abbas and I said to the United States and to anyone who cared to listen.  I’m not saying that we have to have a united Palestinian entity in Gaza and in the West Bank or we don’t negotiate.  I said I’m willing to negotiate.

VERJEE:  But are you willing to negotiate with unity government as it’s going to be with Hamas and with Fatah?

NETANYAHU:  I’ll negotiate with anyone who wants peace.

VERJEE:  You would negotiate with this government?

NETANYAHU:  Well, this government is composed — half of it says that they want to obliterate my people, my country off the face of the earth.  That’s what they said after the signing of the agreement.  They just fired rockets into a yellow school bus .  They fired rockets on our city.  And they just praised bin Laden to the gills and complained — and condemned the United States —

NETANYAHU:  For taking out bin Laden.  This is not — Hamas is not a partner for peace.  If we had a genuine move towards peace, if Hamas adopted the positions of peace in the unity government I would say, great, let’s negotiate.

VERJEE:  Let me ask you this for a minute though .

NETANYAHU:  But, in fact, the opposite has happened.

VERJEE:  There are elements in your own coalition government that make rash statements.  One member, in fact, recently said that President Obama was the biggest threat to Israel than Osama bin Laden.

So my question is, do you — your policy is not made from individual voices of extremism, so why not give this unity government a chance?

NETANYAHU:  There’s a difference between stupid utterances of people who occasionally falter than a constitutional commitment to the eradication of Israel.  This is what we have in the case of Hamas.  They have a charter that calls not only for the elimination of Israel, but for the murder of any Jews anywhere.

VERJEE:  Why not wait and see —

VERJEE:  Why not wait and see what they come out with, with this agreement, rather than make a rash, critical assessment?

NETANYAHU:  Well they’ve already said after they sign the agreement that they were then committed to the destruction of Israel.  It’s not that there’s a big mystery.

VERJEE:  Or maybe you could say maybe there’s an opportunity here.  One question, though, is what if they go ahead and declare a unilateral state in September.  What would you do?

NETANYAHU:  Well, it depends, of course, what will happen.  But I would say nobody can impose peace.  You can’t have — peace can only be achieved through negotiation.  It can’t be dictated.  They could pass — they could always muster in the U.N., automatic majority.  They still have every year, resolutions in the U.N. for Israel’s action to take out Saddam Hussein’s nuclear bomb factory.  They have human rights committee headed by Gadhafi that condemns Israel for war crimes.

NETANYAHU:  Syria’s going to be now a member of that human rights committee.  So you can have any agreement in the U.N., any resolution, but the earth is flat.  But it doesn’t make it right and it certainly doesn’t mandate any kind of action.

What is required is for our Palestinian partners to decide to have peace with us and to negotiate that peace.  And that’s the only way they’re going to get back peace.

VERJEE:  How vulnerable does Israel feel today, with the instability on its borders with Lebanon, with Jordan, with Egypt and Syria?

NETANYAHU:  I think something very big is happening.  I mean, there’s a convulsion that is taking the entire region between the Himalayas and the Atlantic.  There was basically — the 20th century has passed by much of these societies and the 21st century technology is telling their citizens what they missed out on.  So I think that tension has brought down a lot of countries.  They bring down other governments.

VERJEE:  Does Israel — do you feel vulnerable?

NETANYAHU:  We would like to see the triumph of democracy.  I mean, between the rise of democracy and the rise of theocracies, we obviously want to see genuine democracies emerge because that’s something that will guarantee the peace.  But we’ve seen revolutions hijacked.  The 1917 revolution for democracy in Russia was hijacked.  The 1979 revolution in Tehran, the brief Iranian spring was hijacked by a terrible darkness.  The cedar revolution in Lebanon just a few years ago, you know, was replaced by Hezbollah rule.

So we’d like to see the democrats with a small d win out and the terrorists and dictators lose.  But it remains to be seen which is which.  We support the democrats.

VERJEE:  Do you think Bashar al-Assad should go, if you support the democrat?

NETANYAHU:  I think what has to happen is an immediate cessation to the slaying of civilians.

VERJEE:  Do you think he should go?

NETANYAHU:  Any way that stops this slaughter should be entertained.  I know there are many things that international leading powers and the international community are thinking.  But the outcome has to be that this butchering of civilians must stop right now.

VERJEE:  Final question, what do you want the international community to do about Syria?

One, ask and demand of the Palestinians to commit themselves to the existence of Israel.  Don’t embrace the Hamas that calls for our destruction.  But talk about a real reconciliation with a Jewish state mixed with Palestinian state.  And at the same time, work to disarm Iran, because if Iran has atomic weapons, it’s not only that the peace treaty between Israel and the Palestinians will be jeopardized.  It’s that all peace everywhere will be jeopardized and everybody will sway towards tyranny and theocracy.

VERJEE:  Thank you very much.  Appreciate it.  Thank you.