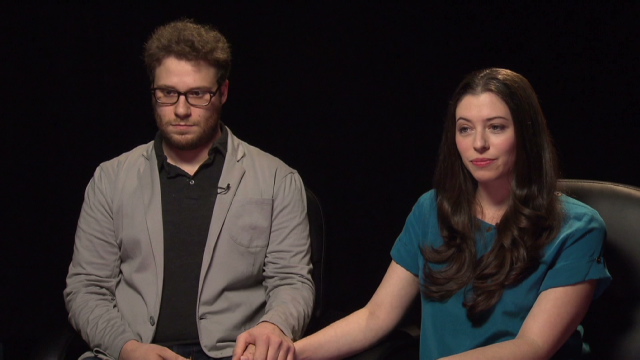 On Sunday May 1st, CNN will air the first Larry King special, premiering at 8pm ET/PT and will be titled “Unthinkable: the Alzheimer’s Epidemic.” It’s being called the disease of the 21st century as an estimated 5.4 million people have been diagnosed with Alzheimer’s. It is the sixth-leading cause of death across all ages in the United States, but many Americans still do not know much about this illness. The one-hour special will look into Alzheimer’s disease, who gets it and why, the race to find effective treatments and a possible cure.

In the above clip, actor Seth Rogen talks to King about supporting his fiancée and her family as they deal with her mom’s early diagnosis at the age of fifty-five. King will be joined by people who have been touched by Alzheimer’s disease and will include interviews with former First Lady Laura Bush and California’s former First Lady and Alzheimer’s activist Maria Shriver; actors Seth Rogen, and  Angie Dickinson; TV host Leeza Gibbons; football star Terrell Owens and  son of President Ronald Reagan, Ron Reagan. Neurosurgeon and CNN chief medical correspondent, Dr. Sanjay Gupta will explain what Alzheimer’s is and how this disease affects the human brain.

Rogen wants the world to know this is a young person’s problem too, “More and more people in our generation are gonna have to deal with it,” Rogen said.  “We’re dealing with it before most people have to,” he tells King.  “But as you get older and you see it happening to your parents, and ultimately realize it could happen to yourself and your friends, it becomes much more real and not some imaginary old person problem, you know?” Shriver, in the first interview she’s given since losing her father, Sargent  Shriver, to Alzheimer’s disease this year tells King, “I think anybody who’s not concerned about Alzheimer’s is in denial.”

In addition to visiting the Mayo Clinic, Larry King will visit the cutting-edge Lou Ruvo Center for Brain Health at the Cleveland Clinic in Las Vegas, and he will be joined by Ron Reagan. While there, one of them will take a brain scan that will indicate if he is at risk for Alzheimer’s or other memory disorders, and one will opt out. Tune in and as they will share the results with the audience and talk to Dr. Jeffrey Cummings, Director, ClevelandClinic Lou Ruvo Center for Brain Health and Larry Ruvo, philanthropist and visionary, to see how doctors are treating patients and what people can do to diminish their risk for Alzheimer’s. Dr. Ronald Petersen, Director, Mayo Clinic Alzheimer’s Disease Research Center, who treated President Reagan warned, “If we don’t do something about Alzheimer’s disease right now, Alzheimer’s disease in and of itself may bankrupt the healthcare system.” The special hour will also broadcast on CNNi and will re-air on Saturday, May 7 at 8pm ET/PT. For additional information please visit Alz.org. Exclusive content will be featured on CNN.com including interviews with actor David Hyde Pierce and Harry Johns, President and CEO of the Alzheimer’s Association.