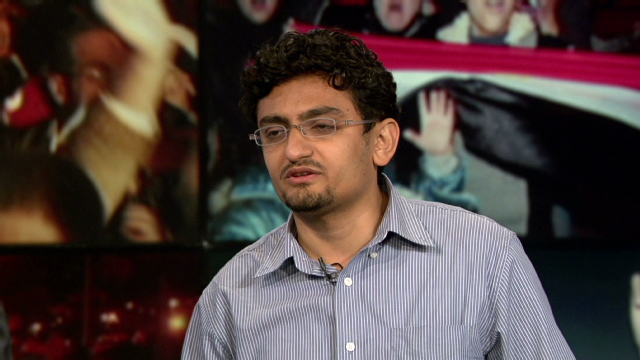 CNN’s Wolf Blitzer speaks to Egyptian Google executive-turned-activist Wael Ghonim about Egypt’s economy.  This full interview will air tonight on The Situation Room with Wolf Blitzer on CNN. A highlight from the interview is after the jump and full transcript will be posted at CNN.com.

WOLF BLITZER, CNN ANCHOR: Wael, let’s talk about the economy in Egypt, because when I was there a few weeks ago, a lot of Egyptians said, you know what, six months from now, if we can’t get jobs, this whole revolution, it could collapse, cause people want jobs, educated, young people like you.

WAEL GHONIM, BLOGGER/EGYPTIAN ACTIVIST: I agree with that, Wolf.  I think, I’ve said it also before, the real counterrevolution would happen if people start not being able to fulfill their basic needs.  Today, I see that the economy, you know, the economy situation is not going in the right direction, and there are definitely risks in investments in Egypt right now, but the world has to realize that this should not go wrong.  The Egyptian revolution should not go wrong.  It actually sends the wrong message to the dictators around the world.

There is a responsibility on every — on everyone in the international community, and I also, I think there is a responsibility to the people who loved the — you know, the spirit and the purity of what happened in Cairo.  You know, bringing tourism back to the country, basically helping getting the funds, you know, the fund that were stolen from the Egyptian people by the old regime freezed and then eventually brought back —

BLITZER:  But you know international companies, they’re not going to go invest unless they’re sure they’re going to make some money, and right now it’s uncertain what’s happening in Egypt.

GHONIM:  Well, I think — I think so it’s sort of like the chicken or the egg.  I think, if the economy stabilized, everything else will stabilize, and the politics will go into the right direction.

BLITZER:  Any tourism — is there any tourism happening right now?

BLITZER:  There are — people are beginning to come back?  Cause so much of Egypt’s economy is based on tourism.

GHONIM:  Yes, it’s actually about 10 to 15 percent of the GDP.  Russians have lift of the ban on tourism in Egypt.  The U.S. still have a high alert, so I think, you know, something — it would be great if they — if they removed that alert.

And actually, you know, I’ve seen tourists.  I personally saw tourists last week in Tahrir walking around in, you know, in the square.  It’s such — such an amazing spirit.

I think, again, like the world need to think of this as — as one of the major concerns.  I’ve already asked like why is it so easy to secure budgets to bomb nations, you know, problem a couple weeks of that budget would actually help build another nation.

And at the same time, there is, you know, waiving the — waiving the debt proceeds that we’re paying to the U.S., or you know, thinking out of the box on how to help the Egyptian — buying Egyptian products, this is very important at this stage.