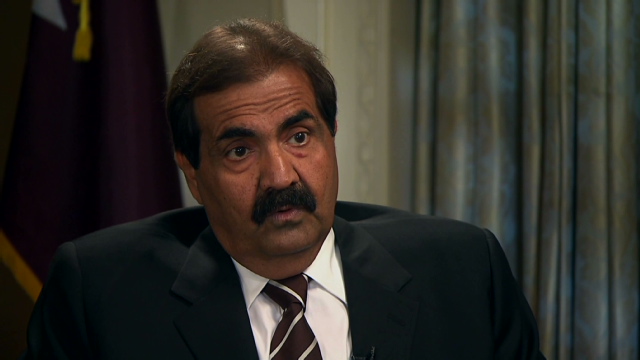 The Emir of Qatar on arming Libyan rebels

WOLF BLITZER, HOST:  Qatar, like France, like Italy, has recognized the opposition. But are you going beyond that, because there were reports that Qatar is providing weapons to the opposition to fight Gadhafi’s forces?

HAMAD BIN KHALIFA AL-THANI, EMIR OF QATAR:  We are acting according to the — to the Security Council resolution.  If it’s allowed to give aid to rebellion, military, other aid, we are going to do it.

HOST:  Is it allowed by the U.N. Security Council Resolution 1973 to provide weapons to the…

AL-THANI:  That’s how we understood it and that’s what the foreign minister of Italy two days ago in Doha announced.

BLITZER:  So you — can you con — confirm that you’re providing weapons? You’re allowed to provide weapons, you say, to the opposition, but can you tell us if you are, in fact, doing that?

AL-THANI:  If they will ask for weapons, we are going to provide them.

BLITZER:  Have they asked?

AL-THANI:  Well, of course they asked, but it will take some time, some training and it depends in if we are going to push for this fast or not, because such weapons…

BLITZER:  Because, Your Highness, you know that there are reports that French-made anti-tank weapons, you’ve already provided to the opposition. Is that true?

AL-THANI:  It might be arrived to them during the last two days.  It’s possible.