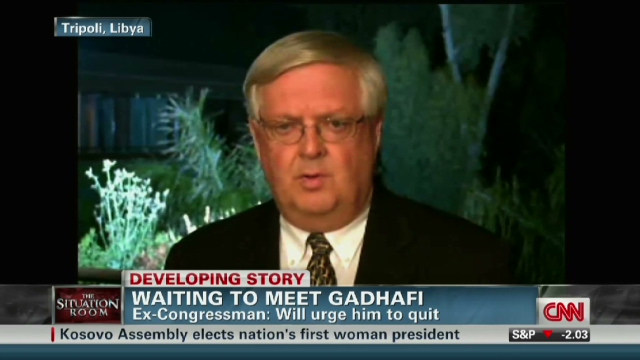 Former Rep. Curt Weldon on waiting to meet with Gadhafi

Former Rep. Curt Weldon is in Libya and waiting to meet with Moammar Gadhafi. Weldon spoke with CNN anchor Wolf Blitzer from Libya, about the meeting and his prior experiences traveling to the country. This full interview aired tonight on The Situation Room with Wolf Blitzer on CNN. More information is after the jump. A full transcript of both Part I and II are at CNN.com.

WOLF BLITZER, HOST:  Let’s talk about your meeting with Moammar Gadhafi.  I take it has not yet happened. Do you expect to meet with the Libyan leader?

CURT WELDON, FORMER U.S. CONGRESSMAN (R-PA):  Absolutely.  The invitation that was sent to me was from his chief of staff, Bashir Salah, who I’ve met on all three of my official visits here in 2004 and 2005.  And the letter specifically says, We want you to come over and meet with the leader and our senior leadership.

And I said it’s worth me coming over to support the administration and to try to let the leader know face to face that this is facing — it’s very grave timing in the situation and they have to have some movement fairly quickly or they’re not going to be happy with the — with the alternatives.

BLITZER:  What’s taking so long? Why haven’t you been able to meet with Gadhafi yet?

As you know from the excellent reporting being done by your folks here, there’s a lot of security concerns and they’re very concerned about where Gadhafi is at any given moment.  That’s one of the issues.

But we’ve been making ourselves available.  We’ve been doing a lot of back channel meetings with friends and associates that I have here and we’ve met with the chief of staff and one of the sons and today with the prime minister, a very lengthy meeting, for two hours.

So we’re going to give them until tomorrow.  We’re not going to stay beyond that.  And we’ve given them some suggestions and we expect a response by midday tomorrow.  And if we don’t, we’ll do an exit conversation with your people and let you know our future dealings.

WOLF BLITZER, HOST:  I just want to clarify your specific role, because some questions have come up about if you’re involved in any business deals, have been involved in business deals with Libya over the years.  You say you’ve had no financial relationship with Libya in any of your capacity since leaving the Congress. Is that right?

CURT WELDON, FORMER U.S. CONGRESSMAN (R-PA):  Absolutely.  I have not made one dime, or, I should say, one dinar from Libya.  Anyone in this country — and that is in case that is in fact today, coming over here, no one’s paying me.  I’m doing this because, as I did for 20 years as the vice chairman of the Armed Services Committee.

BLITZER:  “Wired” magazine is– is — has reported…

BLITZER:  — that your company defelt — Defense Solutions, a company you worked for, did, at one point, propose selling arms to Libya under Gadhafi. Is that right?

WELDON:  No, that’s — first of all, I have no ties to Defense Solutions.  I did some consulting work with that company, as did General Brian McCaffrey and a couple of retired ambassadors.  That company has not been in existence for — “Wired” magazine ought to come up to date, because it’s been basically non-existent for, I think, three or four years.

I did some brief consulting for them.  Never did I ever offer to sell any weapons to Libya because there, as you know, our — our State Department requirements have never allowed arms to be sold to this country.  Unlike the Brits and perhaps some of the other European countries, we have a mandate that that’s not been permitted.

BLITZER:  And just to be precise, you never encouraged — you never worked to lift that — that embargo on selling arms to Libya?

WELDON:  No.  No.  I — I — I have worked to try to normalize relations.  I put together a comprehensive series of initiatives that could bring our people together in health care, in education, in housing, in environment, in energy.  I put together ideas to create a relationship between the Jamahiriya and — and the Congress, as I’ve done in nine other countries.  So, you know, I — I’m proud of what I’ve done and I’m sad that our efforts haven’t paid off and now we’re in the midst of another war that’s cost the American taxpayers almost a billion dollars, money we don’t have.

BLITZER:  And who’s paying for your current trip, together with your delegation to Libya now?

WELDON:  Yes, it’s — the delegation is three people.  I’ve brought over an attorney friend of mine from Houston because there are some things we’re working on that I will not discuss tonight, but I will tomorrow.  You can talk to your — your own people about that, your — your — your station.  Your network has been in the lead on that. My — the only thing that was covered was my air fare over here and — and that’s it.  I’m not asking for any money.  That’s not why I’m here.

BLITZER:  Who — who paid for the air fare?

WELDON:  The air fare was paid for by the team of Steve Payne and Brian Ettinger of Houston.

BLITZER:  So it’s — it’s not — but it has nothing to do with the government of Libya. Are they — are they lobbyists or do they have business dealings with Libya?

WELDON:  No.  No, I don’t know.  You — I don’t believe they do, but you can talk to them.  I know one of them has had friendships, I believe Steve, with — with one of his sons.  But as far as I know, no business dealings. I specifically said I would not go to Libya with any money tied into the Gadhafi family.