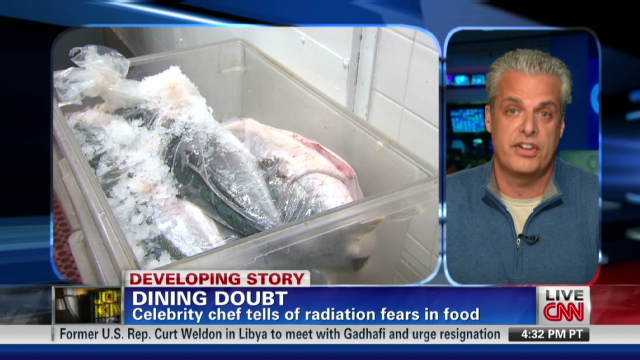 CNN’s John King spoke with Eric Ripert, the chef and co-owner of the New York restaurant Le Bernardin, about taking precautions to detect radiation in seafood. This interview aired tonight on John King, USA – 7pm ET. A transcript is after the jump.

TRANSCRIPT FULL INTERVIEW
THIS IS A RUSH FDCH TRANSCRIPT. THIS COPY MAY NOT BE IN ITS FINAL FORM AND MAY BE UPDATED.

JOHN KING, CNN ANCHOR:  Let’s get some advice from Eric Ripert, the chef and co-owner of the New York restaurant Le Bernardin, which specializes in seafood.  And Eric, let me just start right off by asking you — I saw a picture of you in the newspaper today.  You have a special device that you would not normally see in a restaurant kitchen.  Show it to our viewers, how you are making extra, extra precautions to make sure this doesn’t happen.

KING:  Now, some would say that’s maybe going a bit too far, to an extreme level.  Why did you decide this was so important for you to be absolutely positively certain nobody who’s in your restaurant is getting anything that could be radioactive?

RIPERT:  I wanted to make sure because some of our clients were asking, actually, if the seafood source was reliable, if what we serve is fine and so on.  Our staff was concerned.  I was concerned myself.  I trust obviously the government and the agencies for testing it.  However, I thought by having a machine at the restaurant, it will really make us feel much more comfortable to talk to our clients, for ourselves, and I was very confident that we would find absolutely nothing in terms of radiations, and the result is that we find absolutely nothing.

KING:  And help put that into context.  You say some of your clients, some of your staff were concerned, having questions.  What percentage?

How widespread were the doubts, were the questions, saying hey, are we sure here?

RIPERT:  Well, every night, every lunch, we have about four or five tables out of 25 to 30 tables who are concerned and are asking questions, and they want to know where it’s coming from and if we have information.  And, therefore, it’s logical for us to have the right tool to be able to address these issues to them.

KING:  Am I right in saying you have stopped buying fish from Japan, correct?

RIPERT:  Well, we bought in Japan in the past, kampachi and hamachi, which is coming from a farm from the south of Japan, which is supposedly not contaminated.  However, our purveyor told us last week that it will be very difficult to get some quantities that we needed and the price would be very high.  And therefore, we decided to stop using it at the restaurant, but it had nothing to do with the fact that we thought it was contaminated.

KING:  On the one hand, people would watch you and say, amen, bravo, you’re taking this extra precaution.  On the other hand, some people might say, well, might that not, seeing a famous chef with his dosimeter checking for radiation, might not that add to the concern and add to the alarm unnecessarily?  How did you decide, you know what, I’m going to tilt the balance towards extra precautions?

RIPERT:  No, actually, I thought by adding this machine, we will have a clear message, saying that everything is safe, and it will be a positive reaction from the public potentially.  And that’s what we are hoping, because we are still using Japanese ingredients coming out of Japan, and I have no intentions of taking it from the menu.  And we are using a lot of seafood from the West Coast and from the East Coast, and, therefore, I think today I can clearly say that whatever we have seen on the market and other restaurants, is, to our knowledge, thanks to that machine, not contaminated, and it’s good news.

KING:  A lot of people get skeptical about information from their government in places like this, and we have seen some conflicting and some confusing messaging from the government of Japan.  The United States has been as transparent, we believe anyway, in releasing as quickly as it can the readings from the West Coast and elsewhere.  This is so critical to your business.  Help reassure people out there.  You said earlier you had full faith in what — the information you’re getting from the government about this?

RIPERT:  Oh, yes, absolutely.  I strongly believe that they’re doing the best they can.  The government in Japan seems to be very transparent about the issues that they have.  And we are confident with them, and now we have the machine, and it’s even confirming even more what they are saying, which is the food that comes to America and the food that we are consuming is safe.  And I’m happy about that.  And it’s not — you know, it’s not about scaring people, actually.  It’s about stopping conspiracy theories and stopping paranoia in some cases, to some degree, to some people.

KING:  Amen for that.  And can I get one more peek at the dosimeter before we go here?

KING:  One of our staff members looked on Amazon today, said it was

KING:  Chef Eric Ripert, we appreciate your help tonight putting this all into context.  We wish you the best, sir.  Take care.

RIPERT:  Thank you very much, sir.