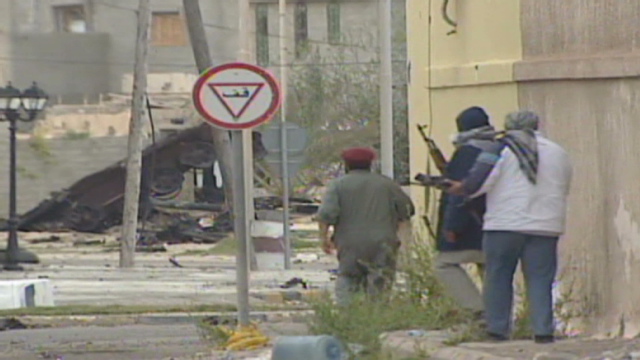 International Correspondent Frederik Pleitgen was one of very few journalists to get inside the Libyan besieged city of Misrata on Wednesday.  Misrata has witnessed some of the fiercest fighting between Gadhafi’s troops and opposition forces, and came under heavy attack yesterday, with further civilian casualties. (The video contains graphic content)

Read Fred’s account of his time in Misrata below

The Libyan leader laid seige to the nation’s third largest and most prosperous city after opposition fighters took control here. Just two hours east of Tripoli, it was the final rebel stronghold in the West.

Now it is a city of fear, uncertainty and human suffering.

International reporters had not been able to access central Misrata and many of CNN’s reports were cobbled together from interviews with witnesses and doctors. That was until Wednesday, when CNN journalists were able to enter the city.

Gadhafi’s forces lob shells into Misrata from encampments on the outskirts. Rooftop snipers take aim at civilians in the heart of the city. One Misrata resident had earlier told CNN that Gadhafi’s men are terrorizing the city; the carnage “beyond imagination.”

Bullets zing through the air. Tension hangs thick and heavy.

An opposition fighter celebrates atop the carcass of a tank. Another shows the consequences of Gadhafi’s heavy hand — destroyed schools, restaurants, gas stations, fire stations.

Outgunned, Gadhafi’s foes fight back with the few weapons they possess. They provide CNN with a video of a man disabling a tank with a rocket propelled launcher.

The evidence of war mounts at the central hospital where men, women and children lie in crowded rooms, forever scarred, and doctors work around the clock without proper equipment, medicine or even anesthesia.

Mohammed, 12, and his older brother were both wounded when mortars hit their home. Mohammed lost several fingers on his left hand. His right hand is gone. His father vows revenge.

“Gadhafi should be killed,” he says.

A man who can do this to his people, Mohammed’s father says, must not be human.