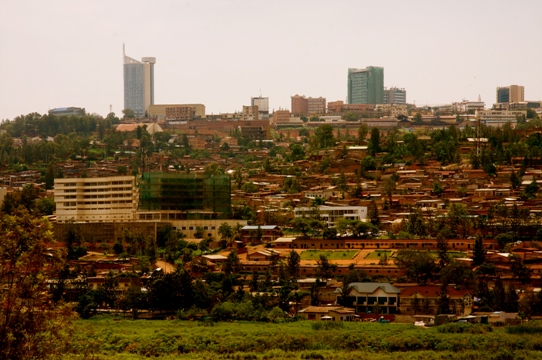 Future Cities goes to Sub-Saharan Africa for the first time, setting its sights on Kigali, Rwanda.

In 1994, Rwanda’s capital city was the epicentre of a devastating genocide, in which one eighth of the country’s population was killed with machetes. Just 17 years later, that very same city has its sights set on a prosperous future. The programme finds out how Kigali is re-inventing itself into a regional hub and East Africa’s go-to destination for business, trade and tourism.

Vision 2020 presents a radical and rapid modernisation, with sceptics questioning the feasibility of such ambitious goals. Kigali’s transformation from post-war devastation is already a mark of progress with a growing economy and keen foreign investment. The city is rated among the safest, cleanest and most business friendly in Africa. Critics argue that future stability and prosperity is being jeopardised by a lack of press freedom and open political debate. President Paul Kagame discusses his vision for the future and rejects these claims, citing the country’s record of investment as a strong indicator of confidence in the nation’s progress. Kigali is putting its past behind it and bracing itself for rapid growth, with ambitious visions for its future as a regional hub. Future Cities discovers the seeds of that future vision taking root. Since the launch of Piers Morgan Tonight, Morgan has interviewed top international names including Oprah Winfrey, Larry King, Condoleezza Rice, Ricky Gervais, George Clooney, Benjamin Netanyahu, Rod Stewart as well as covering the unrest in the Middle East and crisis in Japan where he interviewed on-the-ground reporters and newsmakers, as well as being centre stage covering the Royal Wedding.  The in-depth, personality-driven interview programme continues nightly throughout May as Piers’ inimitable style uncovers the most fascinating details about his newsmaker guests, unearthing hidden stories which surprise, challenge and delight an audience in more than 200 countries and territories worldwide.

It has the potential to be one of the greatest golfing realms in the world, yet India’s national golf union boasts only a few hundred golf clubs in a country that has as estimated 1.2 billion inhabitants. With very few public courses and course-building hobbled by notorious bureaucracy and complex land-ownership, Living Golf finds out what’s in store for the game there.

The programme looks at the country’s golfing history at the Royal Calcutta Golf Club and examines the factors that support and hinder the development of golf within the nation, through the iconic Milka Singhs (father and son), designers, economic commentators, sponsors, the IGU and other key players. With the rise of 22-year-old Gaganjeet Bhullar landing India’s number one spot and the Indian youth team winning the 2011 Asian Junior Golf Championship, Living Golf explores the initiatives aimed at spreading golf through training programmes, plus a look at how international design companies intend to expand the golfing arena by setting up new offices to take advantage of a course-building boom. Open Court in May previews the Grand Slam at Roland Garros in Paris and features the leading man of the moment Novak Djokovic, back in his home city Belgrade.  Djokovic is the first man to genuinely rival the Federer/Nadal era that has dominated the men’s game for the past seven to ten years. Pedro Pinto interviews the world number two star and analyses his impressive start to the year, with notable tournament wins at the Australian Open, Dubai and the ATP World Tour Masters 1000 in Indian Wells. The programme also goes behind the scenes of former French Open champion and renowned musician Yannick Noah’s 50th birthday party in Paris. Yannick performs on stage alongside John McEnroe on the guitar and talks about his great tennis achievements and his life post-tennis.

World Economic Forum on Africa takes place on 4th May.

The UK’s Alternative vote referendum takes place on 5th May.