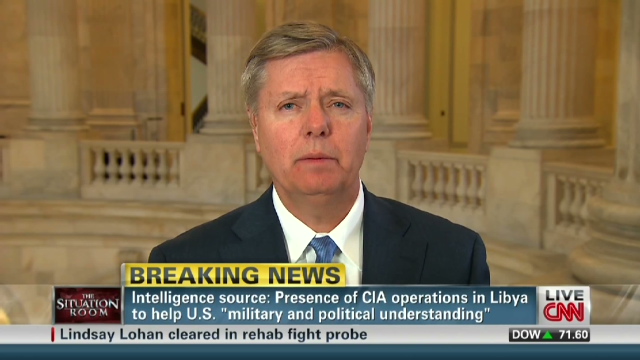 Sen. Graham on CIA in Libya

CNN’s Wolf Blitzer interviewed Sen. Lindsey Graham (R-SC) today on the breaking news of CIA operatives in Libya. This full interview aired during the 6 p.m. hour of The Situation Room with Wolf Blitzer.  A full transcript is after the jump.

Full Interview
THIS IS A RUSH FDCH TRANSCRIPT. THIS COPY MAY NOT BE IN ITS FINAL FORM AND MAY BE UPDATED.

Lots of discuss with Republican Senator Lindsay Graham of South Carolina.  He’s a key member of the Armed Services Committee, he’s just emerged from a briefing, a closed-door briefing that top Obama administration officials had on what’s going on.

Let’s go through some of these points, Senator.  A lot to digest.

BLITZER:  First, this Reuters report that the U.S. is now secretly aiding rebels.  What can you tell us about this?

GRAHAM:  Well, if it’s true, it’s a secret from me, but the idea of aiding the rebels pleases me.  Providing arms is something I’m not so sure about, because what you do on the front end can affect you on the back end, but anything to help the rebels, I think we’ve cast our light (ph) with them and it’s imperative they win today against Gadhafi.  So anything we can do, I would support.

BLITZER:  Well, on the issue of arming the rebels, are you concerned because there could be some al Qaeda elements there?  Is that your concern?

GRAHAM:  You know, to be honest with you, I’m sure there are probably some people under the banner of opposition that are — that may have some al Qaeda sympathies, but I have zero concern about this turning into an al Qaeda-driven state; and the Libyan people are not going to replace Gadhafi to be run by al Qaeda.

But the one thing about arms, you really don’t know exactly how tribal situation works yet.  I’m glad we didn’t arm everybody in Iraq.  And my concern is that, in Iraq, we had a failed policy.  We didn’t have enough troops the ground, the security environment deteriorated, and we went a couple years where we almost lost Iraq.

BLITZER:  He said other options were on the table right now, political sanctions, economic sanctions.  He didn’t say covert action, but as someone whose watched this over the years, that was my immediate suspicion, that there are covert operations upside way to remove Moammar Gadhafi.

I don’t know if you want to talk about that, but I assume you would be happy if they were.

GRAHAM:  I would be happy.  And I really don’t know if they are, and if I did, I wouldn’t tell you.

But, you know, at the end of the day I’m very happy with any strategy that brings about an early end to this conflict.  My concern now is a stalemate, that the opposition forces don’t have enough momentum.  And without air power, you see what happens to them.  They’re unorganized.  They’re very motivated, but at the end of the day, they’re fighting tanks and artillery with Toyota trucks and that’s probably not a fair fight.

BLITZER:  Well, when you say the U.S. should use military force to remove Gadhafi, expel — flesh that out.  Explain what that means.

GRAHAM:  Yes, sir, I’d be glad to. Not ground invasion.  I think if you introduce western troops, American forces on the ground, you would undercut the opposition and really it would backfire. But an aerial campaign focused on helping the opposition with close air support and a campaign in Tripoli.  The way this thing ends most like — most likely is that his inner circle cracks.  Take off his radio and TV propaganda system, take it out. Go after his inner circle.  If you’re an inner circle adviser to Gadhafi, you should have a hard time sleeping at night.

And my concern is that when American air power is not going to be used past Thursday of Friday, that really does limit NATO because they don’t have AC-130 gunships and they don’t have A-10s.

BLITZER:  Well U.S. air power can still be used under the command of NATO, isn’t that right?

GRAHAM:  I don’t know.  That’s a good question that my good friend Wolf Blitzer ought to ask somebody, because if the A-10s and the AC-130 gunships and American-flown missions are not part of the NATO force configuration, then I think we have degraded NATO and that’s an open question.  I’d like to know that answer to that myself.

BLITZER:  Well, because I agree that it already looks like with NATO taking command of this operation, the aerial pounding of Gadhafi’s forces has weakened dramatically over the past 24, 48 hours because there are countries like Turkey and Germany that don’t want NATO to engage as robustly as Senator Lindsey Graham would like.

GRAHAM:  Well, I think part of it has been the weather. But here’s the question to ask going forward, who is commanding close air support.  Who is the commander that sets the missions up each day, and can American forces fly under the NATO banner, or has President Obama taken that off the table?

When you transfer to NATO control, I’m OK with that.  But I would not be OK with idea that the AC-130 gunships, the A-10s and American aircraft are grounded.

BLITZER:  Well, that would be huge news, Senator.  If you’re suggesting that some of the U.S. weaponry are now off the table like these — these combat aircraft you’re talking about or Tomahawk cruise missiles or F-16s —

BLITZER:  — that is huge because it would dramatically weaken the entire NATO operation.

GRAHAM:  Well, my advice to the CNN crew who has done a heck of a job covering Libya, I would ask that question.  I don’t know the answer.

When NATO takes over and the president said we would basically turn over our military operations and we’d be in a support role, does that mean that our A-10s can’t fly under NATO command?  Does that mean our AC-130 gunships, which have pounded the enemy, are now grounded?

If that’s the case, I think we’ve seriously undermined the capability of NATO.

BLITZER:  Did you get answers to all your questions during this briefing that you just emerged from behind closed doors?

GRAHAM:  It was a good briefing.  I never got to ask a question, it was over. You know, Secretary Clinton and Bob Gates are really national treasures in my view.  You know, very good people.  I like President Obama.

But you know, we have a strategy that is eerily similar to Iraq in the sense that we didn’t have the right strategy to bring about the right answer.  And the right answer is to replace Gadhafi.  And if American military power can’t be used airily, then I think we have really degraded NATO at a time — I don’t see how you politically replace him if you don’t have the military component to make him leave.

His inner circle is not worried about sanctions, they’re not worried about, you know, bank accounts being frozen; they’re probably sitting on a ton of cash.  What they would be worried about is having their compounds bombed by the most capable air force in the world, the United States Air Force.

GRAHAM:  That’s a very good question.  Here’s my construct of being a military lawyer.  Here’s the advice I would give my commander.

I would argue that Gadhafi is an unlawful combatant, not the legitimate leader of Libya.  He doesn’t have the status of being a nation-state leader and that he would be fair game under my construct.  That a radio and TV network helping his unlawful enemy combatant cadre should be taken out to protect the Libyan people from a propaganda machine that puts them at risk.

That’s the way I would look at Gadhafi, as an unlawful enemy combatant.

I would recognize somebody in the opposition.  One thing that America needs is to know more about the opposition.  And on some networks, all you see is a guy jumping up, down, yelling ” Allahu Akbar ” with a baseball cap.

I know there are some very sophisticated people leading this opposition.  My advice to the administration is to introduce America to the leaders of the opposition so we would be reassured who we’re dealing with here.

BLITZER:  Senator Graham, thanks very much for joining us.

BLITZER:  Sounds to me like you would want to put Gadhafi on the same list as bin Laden, but that’s a subject for another day.  We’ll talk about that down the road. Senator, thank you.