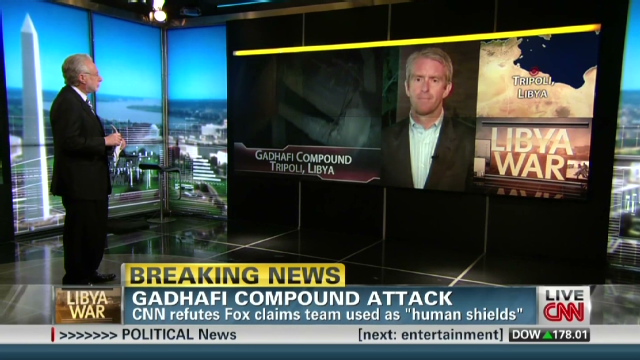 Robertson: This allegation is outrageous and it’s absolutely hypocritical

CNN senior international correspondent Nic Robertson responds to allegations that reporters in Libya were used by Gadhafi’s forces as a human shield.  A full transcript of the interview is after the jump.

WOLF BLITZER, HOST:  On another related — unrelated matter — maybe it is related

— I want you to explain what you know about this suggestion Fox News reporting that you, a Reuters crew, some other journalists, were effectively used by Gadhafi as a human shield to prevent Allied fighter planes from coming in and attacking a certain position.

Explain what you know about this.

NIC ROBERTSON, CNN SENIOR INTERNATIONAL CORRESPONDENT:  Wolf, this allegation is outrageous and it’s absolutely hypocritical.  You know, when you come to somewhere like Libya, you expect lies and deceit from the dictatorship here.  You don’t expect it from the other journalists.

Why do I say that?

Because Fox News has said that they didn’t send somebody on this trip last night because they said it was a quote, unquote, “propaganda trip.”

They sent a member of their team.  He was non-editorial.  He was non-technical, not normally a cameraman.  He was given a camera by the team and told to come out and come on — come on the bus with the 40 other journalists who were there, who were free to get on the bus, free to get on the bus when they wanted, told us, when he was on the bus, that even he — this member of this Fox team, was surprised that their correspondent and the normal cameraman weren’t coming out, that he was being sent — this isn’t his normal job — that he was being sent.

So that’s why I say what Fox is saying is outrageous and hypocritical.

And the idea that we were some kind of human shields is nuts.  I mean if they had actually been there — Steve Harrigan, the correspondent here, is somebody I’ve known for many years.  I see him more times at breakfast than I see him out on trips with government officials here.

Other correspondents here who go out regularly say the same things — NBC, CBS — all the other news teams here go out — not on all the government trips.  We didn’t go out on another one yesterday.

But we did — we very, very rarely see the Fox News team out on the trips.

We were taken there.  We went in through the security.  We filmed the building.  We were given 15, 20 minutes to do that, five minutes in Gadhafi’s tent and then we were taken out.

And I was literally physically pushed back on the bus when we left.

That’s how quickly the government officials wanted to get us out.

If I sound angry, it is because I am.  As I say, I expect lies from the government here, I don’t expect it from other journalists and it’s, frankly, incredibly disappointing to me — Wolf.

BLITZER:  Well, did this Fox representative who went with you on this trip, did he have a camera?

ROBERTSON:  He was given a camera by the cameraman and the correspondent who stayed in the hotel and didn’t go out, a correspondent who very rarely leaves his hotel.  I don’t know who he’s talking to here to pick up and find out what the story is.

When we go on these government trips, it’s for a very simple reason — because we don’t want government officials to film it themselves, edit it themselves and then hand it off to us.  We want to go for ourselves.

We want to go and see, is it a command and control system?

What are the telltale signs that that the government wouldn’t let us see if they edited the tape? That’s why we go, because we’re news professionals and we want to see it for ourselves.

As I say, I’m — I’m disappointed, shocked.  I find this a very, very poor situation — Wolf.