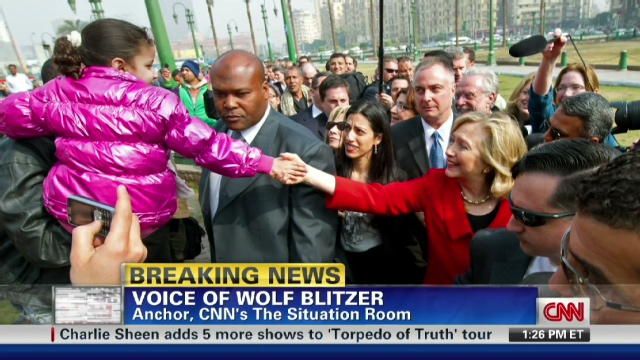 As CNN anchor Wolf Blitzer travels through the Middle East and North Africa with Secretary of State Hillary Clinton and the U.S. delegation, Blitzer sat down for a one-on-one interview with Secretary Clinton. They discussed the crisis in Japan, the situation in Libya and the latest on the political revolution in the Middle East and North Africa. Parts of the interview will air today during The Situation Room with Wolf Blitzer from 5 p.m. to 7 p.m. ET on CNN and CNNI.  Transcript of Wolf’s call with CNN anchor Ali Velshi about the highlights from his interview with Secretary Clinton is after the jump.

Transcript
THIS IS A RUSH FDCH TRANSCRIPT. THIS COPY MAY NOT BE IN ITS FINAL FORM AND MAY BE UPDATED.

ALI VELSHI, CNN ANCHOR:  I want to go right to Cairo. Wolf Blitzer is on the phone.  He’s traveling with Hillary Clinton, the Secretary of State. Wolf, what have you got?

WOLF BLITZER, HOST, “THE SITUATION ROOM”:  We had a long interview with the secretary of state, Ali on four subjects — Japan, Libya, Bahrain, what’s happening in Bahrain right now, serious strains, by the way, in U.S./Saudi relations as a result of that.  And, finally her own future.

And if you have time, I’ll go through and give you the headlines.

BLITZER:  First on Japan.  Right now, she says it’s a minute by minute decision the U.S. is considering but as of right now, as of this minute, the U.S. is not going to urge its citizens, its diplomatic personnel, family members, U.S. Military, to start evacuating from Japan, but that could change based on what’s going on right now.  It’s a very, very worrisome situation, potentially she says it could be even worse, considerably worse than Three Mile Island in Pennsylvania, which occurred back in 1979.  She’s really worried, obviously, about what’s happening in Japan right now.  We had a lengthy exchange on that.

On Libya, I said to her, you know, it looks like Gadhafi is winning and she got very, you know, angry — not angry necessarily, but very forceful in suggesting Gadhafi will not win.  He is not winning.  I said, well look, he’s getting ready to move on the rebel forces in Benghazi.  And she said, you know what?  The United Nations Security Council is getting ready to move on a no-fly zone resolution.  I said well, what about the Chinese and the Russians?  They might veto it.  She said, well after the Arab league endorsed it, they might not.

We went back and forth, basically.  I said while you guys are talking a lot of Libyans are going to die and there’s going to be a slaughter in Benghazi and elsewhere.  And she recognized the dangers but said adamantly the United States is not going to do anything unless the U.N. Security Council authorizes for it first.  There’s not going to be any unilateral action.

But I think on the Bahrain issue she was upset about Saudi Arabia’s decision and the United Arab Emirates decision to send ground forces to help the King in Bahrain.  She said this is not acceptable, it’s not working.  Yes, the U.S. has a close relationship with these countries but there’s a difference of opinion right now, serious difference, there’s a serious strain in relationship.

VELSHI:  Well, Wolf, let’s get to the core of the first for a second because this has been an issue with respect to Bahrain.  It’s a country where the leadership has had excellent relationships with its neighboring countries and with the west.  It’s an important place, as you mentioned, yesterday to American interests.  But there is always a danger of Bahrain becoming a bit of a proxy war, Iran on one side, Saudi Arabia on the other side, and the U.S. caught up in the middle.

Is that the danger that we’re looking at here?

BLITZER:  Absolutely.  And let’s not forget, Bahrain is the home of the U.S. Navy’s Fifth Fleet in the Persian Gulf.  It’s a strategically important country, an oil-producing country, an affluent country.  So there’s a lot of interest.

The protesters are largely Shiite.  And I asked her, are you concerned that if these protesters win, the Shiites in Bahrain will then align themselves with the Shiite majority in Iran.  And she went back and forth with me on this issue but she made it clear that what the Bahraini government is now doing, the Bahraini military, the Saudi military, the UAE military, is not acceptable to the United States, and especially not allowing some of these protesters who have been shot to go to hospitals.  She’s very upset about this.

And as you correctly point out, Ali, there’s a lot of strategic and geopolitical interest in what’s going — economic interests — Bahrain.  By no means an easy issue.  But her frustration was clearly evident when we discussed that and discussed Libya, discussed Japan.

VELSHI:  Well I think it’s a good bet somebody as busy as her is going to be doing something interesting.

Wolf, thanks for this and thanks for staying on top of this because there are some people who express concern that as a result of our necessary and extensive coverage of what is going on in Japan, which is going to continue there’s been some slippage of what’s going on in the Middle East.

And we’re still very much on top of this and you are for us, as well.  This is going to be on Wolf’s show.  He’s going to be doing “THE SITUATION ROOM” live from the Middle East again so make sure you tune into that because we will have all of our coverage of Japan.