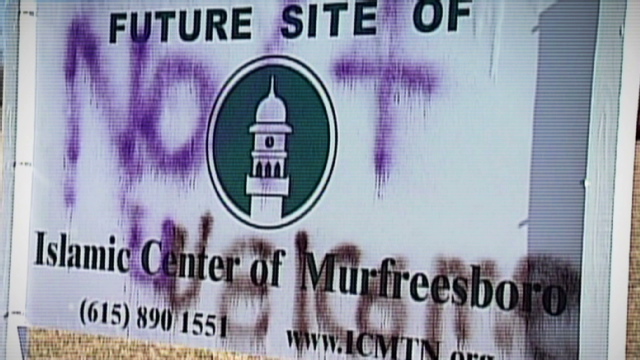 Muslims in America: O’Brien Reports on Religious Tension in the Bible Belt

From New York to California, since Sept. 11, 2001, fears of radical Islam, terrorism, and “Sharia law” have fueled opposition against mosque projects and launched a national debate around religious freedom protections.  Murfreesboro, Tenn. has just over 100,000 people, 140+ churches, and one mosque.  For decades, Muslims have lived and prayed in Murfreesboro without incident, yet in June 2010, when the Islamic Center of Murfreesboro sought county approval to build a new 53,000 square foot Islamic center to include a school, a gym, a cemetery, and a mosque – construction plans were met with some support from residents (Muslim and non-Muslim), but also with suspicion and street protests, and even national attention when televangelist Pat Robertson voiced his opposition to the proposal.

CNN anchor and special correspondent Soledad O’Brien chronicles this dramatic public debate in Unwelcome: The Muslims Next Door, which will debut on CNN/U.S. on Sunday, Mar. 27 at 8:00p.m. ET and PT.  The one-hour documentary will re-air on Saturday, Apr. 2 at the same airtimes.The current Islamic Center of Murfreesboro says it needs to expand to accommodate the need for larger prayer and activity spaces for the growing Muslim community.  Yet, as the center proceeded with its plans, the imam began receiving hostile telephone calls, and the construction site was vandalized multiple times – including spray painting of the words “NOT WELCOME” over the construction sign, and an arson fire that destroyed equipment at the site.  A CNN interview of members of the mosque at the construction site was interrupted by the sounds of gunfire, prompting calls to the local police who arrived to investigate the source of the shots.

Kevin Fisher, a 45-year-old single parent, is the outspoken leader against the planned center in Murfreesboro, his hometown of over 20 years.  Fisher has organized other town residents via social media to gather thousands of signatures, organized large rallies, and filed legal injunctions against the expansion of the Islamic center.

“Neighbors were outraged that something of this nature was being basically being shoved down our throats and we didn’t know anything about it,” Fisher says in the documentary.

Influential town residents Sally and Howard Wall were major funders for the legal efforts to seek an injunction against the mosque.  Sally Wall cites media reports of radical Muslim violence around the world and in the U.S. as the reasons for her concerns.

“There is this enormous building, which is going to be occupied, by people, who are of the same religion of the people we are fighting in Afghanistan,” she says.

When O’Brien points out that Muslims in the U.S. overwhelmingly seem to identify themselves as Americans, governed under U.S. laws, Wall says, “I think Sharia law is trying to creep in [the U.S.] – because that’s what they are taught…I think they should try to come in the 21st Century.  If they [Muslims] would quit covering, [they] would find this a much easier place to live,” she tells O’Brien.

“This is America. What is this?  People can disagree with each other kindly,” says Imam Bahloul, “but violence like this is nonsense… for children to be scared in the Mosque, this is bad…this is sad.”

Additional reporting on the debate over the Murfreesboro Islamic Center, coverage of the Congressional hearings requested by Rep. Peter King (R-NY) on what he describes as “the radicalization of American Muslims,” and excerpts from Unwelcome: The Muslims Next Door can be found at www.cnn.com/inamerica.  CNN Student News is producing an Educator and Parent Guide for the documentary, which will promote critical analysis of news and information include discussion questions, and a learning activity.  The guide will be available on www.CNNStudentNews.com prior to the debut of the documentary as a companion viewing aid.

Jason Samuels is lead producer, Kimberly Arp-Babbit is producer and David Timko is producer / editor for Unwelcome: The Muslims Next Door.  Al DiSanti and Ross Helman are editors for this production.  Geraldine Moriba is the executive producer for CNN’s In America unit.