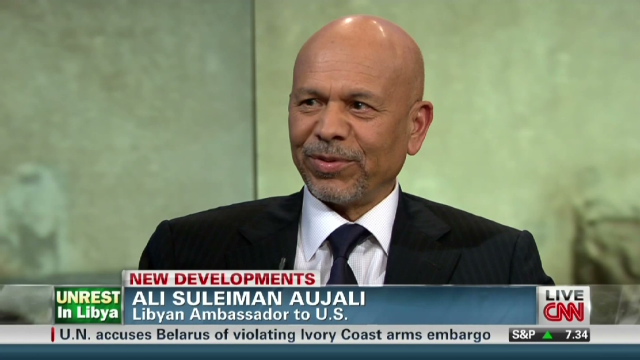 This interview aired on The Situation Room with Wolf Blitzer during the 6 p.m. ET hour. Full transcript is posted at CNN.com

WOLF BLITZER, HOST:  You’re the Libyan ambassador to the United States, but it’s an unusual situation.  You’ve broken with Gadhafi.

BLITZER:  Are you still the Libyan ambassador? Does the U.S. government recognize you as Libya’s ambassador right now?

AUJALI:  Look, if the United States does not recognize me as ambassador of the new — of the new Libya, then they have no credibility.

BLITZER:  Have they said anything to you about that?

AUJALI:  They don’t say much, but if they do that, they have no credibility. We are the voice of the people now. They have been listening to Gadhafi for 42 des — for 42 years. What happened?

Now we have to listen to the voice of the people for the first time in 42 years. This is the credibility of the United States.  If they don’t stand by the people and with us in this time, then, believe me, your credibility is in — in danger.

BLITZER:  So when you call the State Department or the White House, do they take your phone calls?

BLITZER:  They talk to you?

AUJALI:  And — oh, until today, they call — they called and they spoke to me — speak to me.  And then we have some business going on. But it is up to them to decide.  I am still the voice of the people.  I am not sticking to the position.  But I want to make my case. And who will represent the people if Gadhafi — if they will not recognize us?