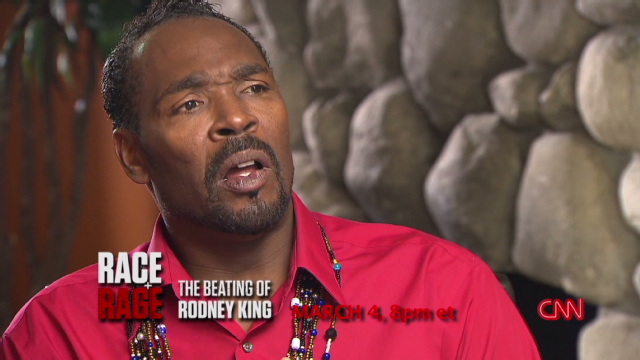 In the early morning hours of March 3, 1991, construction worker Rodney King and two companions were pulled over after a high-speed chase in Los Angeles.  King’s friends were arrested without incident, but the violent confrontation between King and the officers on the scene made national headlines, and ignited racial tensions in the city – and the nation.

King was tasered, kicked, and beaten by officers on the scene.  He received more than 50 baton blows that crushed bones, shattered teeth, injured his kidneys, and fractured his skull.

Lemon asked him what thoughts he had during the beating, “Stay alive – I knew I had to survive this,”  King tells him in an exclusive interview.

The altercation awakened George Holliday who grabbed his home video camera and filmed the incident.  The video became a national sensation and the cornerstone of an excessive force trial against the Los Angeles Police Department.

King became a visual symbol of police brutality, but the officers were acquitted in the original trial.  News of the acquittal ignited anger that erupted into riots in Los Angeles that lasted for days.  Over 50 people were killed, businesses were looted and burned, and even cities as far away as Atlanta reported violence inspired by the news of the verdict.

Lemon and King revisit the scene of the beating together, retracing the events that altered his life, and the riots that followed.  Lemon also speaks with Bobby Green, who famously rescued white truck driver Reginald Denny, who was assailed by a mob at a city intersection during the riots.

A digital feature deconstructs the timeline of the events of March 3, 1991, and includes a special report on King’s life today.  The Holliday video became a powerful example of “citizen journalism” and is examined in the context of other watershed historical moments witnessed and captured by citizens across the country and around the world.  These and video excerpts from the documentary will be reported on www.cnn.com.