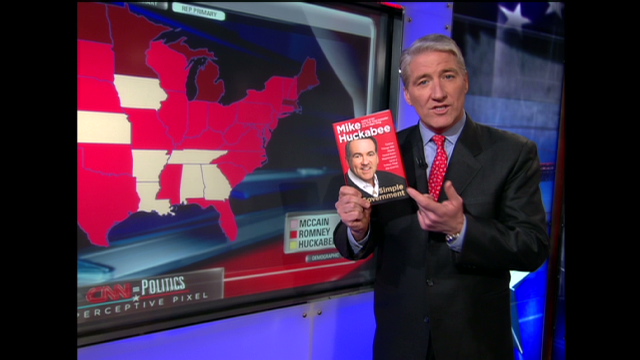 CNN’s John King sat down with former governor Mike Huckabee today to talk about events in Libya, the 2012 presidential race and his new book.

The full interview will air tonight on John King, USA at 7 p.m. ET. The full transcript will be posted on CNN.com after the program and an excerpt is below.

Second Video: Frmr. Arkansas Gov. Mike Huckabee says the option of a no-fly zone should be kept on the table when dealing with Libya.

HIGHLIGHT TRANSCRIPT
THIS IS A RUSH FDCH TRANSCRIPT. THIS COPY MAY NOT BE IN ITS FINAL FORM AND MAY BE UPDATED.

JOHN KING, CNN CHIEF NATIONAL CORRESPONDENT:  As you watch all this unrest in North Africa and in the Middle East, Libya is front and center right now, if there were a President Huckabee, not a President Obama, would you do anything differently than this president is doing in the current situation in Libya?

MIKE HUCKABEE, FORMER GOVERNOR OF ARKANSAS:  I think I’d make it very clear that the United States is not going to stand by and watch a country slaughter its own people in cold blood, that there is a sense in which there is a virtual genocide going on.

I’m still hopeful that Libya’s army will take Gadhafi out, and I think that’s the solution we can all hope for. There’s clearly a man who has virtually escaped the asylum who is in a position of extraordinary power.  But when a person starts talking about killing his own citizens and then following up on it, creating rivers of blood in his own streets and blowing up the one resource that his country has to give it a foundation for any economic hope, he’s clearly a madman.

And this is a person who is maniacal. And now we are beginning to learn that he did in fact order the bombing of Pan Am 103 over Lockerbie, the disco in Berlin. You know, these are acts of international terrorism, and I expect more than a strongly worded letter from the U.N.

KING:  Well, then what the president of the United States?  What would you do as president?  Would you use military force?  Would you impose a no-fly zone?  If he — if Gadhafi  —

KING:  — continues, what would you do?

HUCKABEE:  A no-fly zone, very important, because that way you keep them from flying mercenaries in.  Maybe even a naval armada somewhere off the three-mile international boundaries just as a presence and even to say, we stand ready to — to do what is necessary to make sure that there’s not an act of genocide against those people.

KING:  So, in your view, President Obama is being too timid?

HUCKABEE:  In light of the urgency.  But — but I don’t have the NSA report sitting in front report, so I’m always a little careful to say, here’s what I would do, because I think you have to base a decision based on good intelligence and information, which a person in my capacity as an ordinary citizen at this point simply doesn’t have.