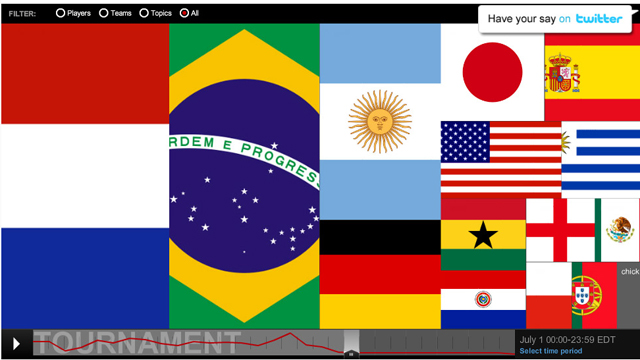 CNN has won a prestigious award in the ‘Innovative News’ category of the UK’s Royal Television Society (RTS) Awards for its World Cup Twitter Buzz initiative.  The winning entry, announced at the Awards ceremony in central London last night, highlighted how CNN teamed up with Twitter to create a tool to enable Web and TV viewers around the world to visualise social media activity during the 2010 World Cup.

The tool was created in-house, with collaboration between CNN’s journalists, designers, technical, PR, marketing and sales teams in London and Atlanta. It featured as part of CNN’s World Cup coverage output across all its services including CNN.com, CNN International, CNN US, CNN en﻿ Español and CNN HLN.

Nick Wrenn, Vice President of CNN International Digital, says: “CNN competes in many different markets, none more competitive than that of the UK. It is an honour to be recognised by the RTS among our industry peers.”

“It is very gratifying to win in the innovation category, which speaks so much to CNN’s commitment to harnessing technology in unique and distinct ways,” adds Tony Maddox, CNN International Managing Director.

CNN’s Twitter Buzz mission was to put the fans from all over the world at the heart of its coverage and give them a unique live experience to complement the match action.

The more a player, team or topic was tweeted, the bigger their picture on the screen. Updating every few seconds, players would rise and fall with every goal or red card, along with referees and celebrity fans.  On the first day of the tournament, the word Bees filled the page; a reference to the unique sound of the vuvuzelas.

During the tournament, Twitter Buzz curated more than 11 million World Cup-related tweets. At its peak, the interactive processed more than 13,000 tweets a minute when England played the US on 12th June.

By the tournament semi-finals, the Twitter Buzz page on CNN.com had been viewed more than 650,000 times, with users typically lingering for several minutes.

CNN has previously won the Innovation Award in 2002 when its satellite telephone technology ushered in a new era of in-the-field newsgathering.