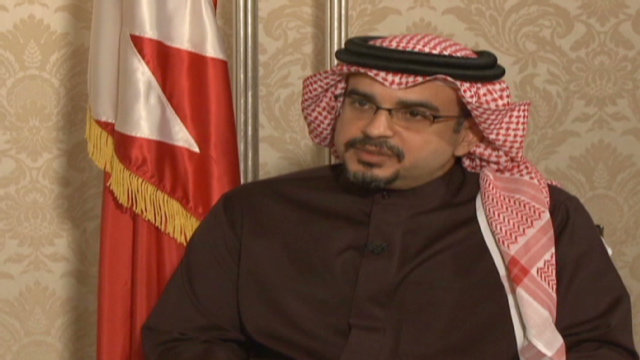 ANY USE OF THIS MATERIAL MUST CREDIT CNN**

The full transcript of the interview is after the jump.

H.H. SHAIKH SALMAN BIN HAMAD BIN ISA AL-KHALIFA, CROWN PRINCE OF BAHRAIN:  What has happened is that we have, under the leadership of His Majesty, decided that the best way to handle this situation without any further loss of life or injuries is through dialogue.

ROBERTSON:  Who are you engaging with dialogue now?

AL-KHALIFA:  All political parties in the country deserve a voice at the table. His Majesty, last night, issued a decree charging me with leading that dialogue.  And my role has been to diffuse the situation, to reach out to all of the political parties and to make sure that trust is built between all sides.  So what happened today was a first step in building that trust.

I think there’s a lot of anger, there’s a lot of sadness.  And on that
note, I would like to extend my condolences to all of the families who lost loved ones and all of those who have been injured.  We are terribly sorry and this is a terrible tragedy for our nation.

ROBERTSON:  Yesterday, people saw the pictures of a group of men walking towards the roundabout with their hands in the air saying, “Peace, peace, peace.”  There was a volley of shots and a number of them were seen immediately afterwards on the ground, one apparently — at least apparently dead.  What happened?  Who is responsible?

AL-KHALIFA:  Well, nobody has died yet from that, but one is very, very, very critically ill.  It was a terrible tragedy.  When I heard that
news, I hopped into my car and drove straight to the TV station and
spoke to the nation and appealed for calm.

How that happened will have to be discussed and studied and understood. There is a lot of tension on the streets.  The net effect, of course, has been making our job much harder.  But what we must do is extend our hand to all of those who would like to reach out across the aisle to one another from all sects, from all political ideologies and say enough.

This is not the Bahrain I know.  I never thought I’d see the day that
something like that would happen.

ROBERTSON:  Has there ever been a moment so tense and dangerous in Bahrain’s history as today?

AL-KHALIFA:  I don’t know what the soldiers in Northern Ireland felt or Ohio (sic) State in America, but this is our tragedy and we will have to commemorate it some way.

ROBERTSON:  And now the protestors are back in Pearl Roundabout.  What will happen?  Will they be allowed to stay there?

AL-KHALIFA:  Absolutely.  We are working to get them to a safe place. Our big fear — the protestors in Pearl Roundabout represent a
significant proportion of our society and our political belief, but
there are other forces at work here.  This is not Egypt and this not
Tunisia.  And what we don’t want to do, like in Northern Ireland, is
descend into militia warfare or sectarianism.  It is our role to build
enough trust with the moderates in the country that we can transcend this problem in any future roles (ph).

ROBERTSON:  The reforms that the people are calling for, reforms that will bring, they say, equality, better housing, better jobs, can you guarantee at this stage that these are going to be on the table and are achievable for all these people?

AL-KHALIFA:  Absolutely.  And because all of us will be involved in
making them happen, I’m not going to exclude anyone from the process of rebuilding our national identity.  We almost lost our soul yesterday.
It was a very difficult day.

ROBERTSON:  And to the people who say reforms were started ten years ago and we saw nothing, how can we trust the — the government now?

AL-KHALIFA:  Well, I mean, nothing is a far cry from what was achieved. People wouldn’t have been able to have conversations about political issues ten years ago, there were no political societies — societies ten years ago.   There was no Social Security guarantees, there was — I mean, massive — there was no vibrant press as there is now, there was no Internet freedom, although I could argue that needs more.

But what is certainly the case is it wasn’t enough and we need to do
more and I pledge myself to that task to the best of my ability.

In an exclusive English interview, CNN’s senior international correspondent Nic Robertson sits down with the Crown Prince of Bahrain to discuss the political unrest there.