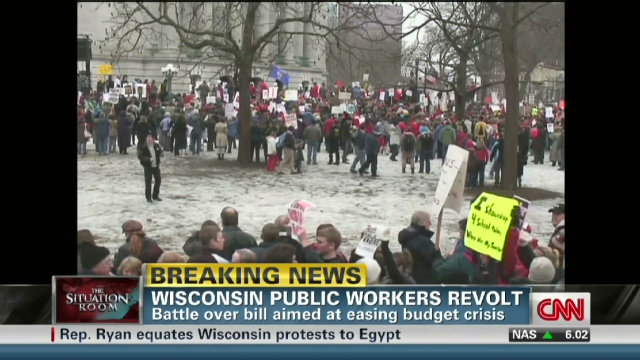 Wisconsin Democratic State Sen. Jim Holperin spoke with CNN’s Candy Crowley about state budget cuts and public unions. This interview aired in the 5 p.m. ET hour of The Situation Room with Wolf Blitzer. Crowley also spoke with Mary Bell president of Wisconsin Education Association Council, in the 6 p.m. ET hour. Both transcripts are after the jump.

CANDY CROWLEY, GUEST HOST:  Joining us now, one of the no-shows, Democratic State Senator Jim Holperin. Senator, thank you so much for joining us.  I wanted to read you a tweet from your new governor who just a little while ago tweeted, “Senate Democrats should show up for work like other Wisconsin taxpayers did today.”

I think the question here is, is this democracy at work.  The people of Wisconsin had an election, they elected a Republican legislature and Republican governor.  They’re now going about work, and the Democrats are not showing up to do their part.

JIM HOLPERIN (D-12th DISTRICT), WISCONSIN STATE ASSEMBLY (via telephone):  Candy, the Democrats want to debate the budget cuts, they want to vote, and we will vote, just not today.  And the reason not today is because we don’t believe sufficient time has passed for the people of the state to absorb the far-reaching and unprecedented changes to collective bargaining that the governor is recommending that have nothing to do with budget cuts.

CROWLEY:  So you’re going to state out until what happens?

HOLPERIN:  We would hope the governor of the state would do now what he should have done originally, and that is to sit down with the public employees in Wisconsin and talk this out.

HOLPERIN:  I have spoken to dozens and dozens of public employees over the past three days, who have said, yes.  They have conceded that they want to help the state out of its budget difficulties.  They will agree to pay more in health care and more in pension benefits.

What they cannot abide, Candy, is for this governor to unilaterally take away their collective bargaining rights forever.

HOLPERIN:  That’s absolutely correct.  The bill that we have is supposed to be a budget repair bill, but that’s not all that it does.  If all that it did is repair the budget, the Senate Democrats would be on the floor today, voting, debating. We may vote no, but we would be there.

This budget repair bill does far, far more than just balance a budget.  It takes away in an unprecedented weight decades of collective bargaining rights that local employees in Wisconsin have had.

CROWLEY:  So where are you now, and how does governor and your Republican colleagues, how do they coax you back to work?

HOLPERIN:  Well, we’re not that far from the capitol.  We are at an undisclosed location, but we could arrive in a very short time. I think if the governor would agree to just meet and talk with public employee employees, I’m not at liberty to speak for all Democrats, but I think for myself, that would be something that would need to be done.

CROWLEY:  And just quickly, sir, in a yes or no.  Do you think that the governor is trying to destroy public unions?

CROWLEY:  Wisconsin State Senator Jim Holperin, we appreciate the brevity.  Thank you so much for being with us.

FULL TRANSCRIPT: Mary Bell, president of Wisconsin Education Association Council
THIS IS A RUSH FDCH TRANSCRIPT. THIS COPY MAY NOT BE IN ITS FINAL FORM AND MAY BE UPDATED.

CANDY CROWLEY, GUEST HOST:  Joining me now on the phone, Mary Bell, Wisconsin Education Association Council, which essentially, Mrs. Bell, is the teachers union, correct?  Teachers and others that work in schools?

BELL:  Well, that — that really is the crux of this issue, because it isn’t that we disagree — excuse me — that people in the public sector need to pay their fair share of pensions and health care benefits.

Now, we’ve bargained those in the past, and the payments we make have been part of those bargains, but we understand the state is in a fiscal crunch and that there are shortfalls that need to be met.

What we disagree with the governor about is that he hasn’t asked people about their willingness to take on those sacrifices and under the guides of a fiscal policy, he’s stripping people of those very collective bargaining rights that we believe can help them make better decisions about contributions and how we meet the fiscal needs of the state.

CROWLEY:  But with all due respect, those collective bargaining rights that you currently have have kept those contributions very low and, in fact, have been, obviously, contributed to the deficit.

So how is the governor to judge the willingness of teachers and of other school employees, other state employees to say, yes, I’ll put twice as much into my health care coverage?  How would we know?

BELL:  I would, in fact, disagree with the facts on that, because before Governor Walker made this proposal, our state employees were making large concessions on pension, health care and on salary benefits.  And those proposals were not enough, he has decided not to talk to them about that.

In terms of school district bargains, we do those at the table every single time we have a contract discussion.  And in fact, we have made changes in district after district about health care, and have been charged in large measure under our previous bargaining system with the kind of contributions that are made, they get charged against our settlement packages.  And so, salary dollars have been given up in order to meet those particular demands.

CROWLEY:  I’m assuming what the governor, judging from his words that I’ve read, is trying to make it easier for some of the local districts to do what they have to do to keep the schools viable and to protect public jobs.

What they’re arguing is if we do not get these concessions, we will have to lay off public workers.  Do you buy into that argument?

BELL:  I believe the way to reach the fiscal targets that he needs to is to actually say to people these are the targets that we need to get to, how do we get to them.  And then we let those go back to the bargaining table.

At the state level, they’ve already agreed to this that.  What he wants to do in addition is strip the collective bargaining rights, which isn’t a fiscal item at all.

CROWLEY:  Have you agreed at the bargaining table in some of these places to the increases in contributions that he’s talking about at that level?

BELL:  He’s mandating them at the state level before a conversation can take place.

CROWLEY:  So it isn’t as though you’ve agreed to, OK, we’ll pay for half of the pension costs.  We’ll take a — we’ll double the amount?

BELL:  We haven’t been asked.

CROWLEY:  So you’re objection is that he didn’t come to the schools and say, will you do that, but wouldn’t that then just put it back into collective bargaining?

BELL:  Well, I believe that collective bargaining is where it gets solved.

CROWLEY:  And so, you think that the governor is trying to do what here?  You think this is not a fiscal matter at all?

BELL:  No.  And in fact, the State Legislative Fiscal Bureau has said that of the items in the budget fix, only a very small number of them are fiscal.  The major items in this budget fix bill are to strip the collective bargaining rights of public employees in our state.

CROWLEY:  Let’s say that the bargaining rights stay in.  Let’s say they take that part out, if this were doable.

CROWLEY:  Would you then agree, do you think your members would agree statewide, fine, we’ll double what we’re now paying into health care insurance, we’ll pay half of our pension costs.  Is that acceptable to you?

BELL:  I believe that my members are ready to step up to the plate and address what needs to be addressed to get to the budget shortfalls, the targets that need to be there.

CROWLEY:  The facts of this matter at this moment are that the Republicans have the numbers in both — in the state house, on both sides to pass this.  How is this going to end?

BELL:  Well, we will find out.  People that are elected to office may belong to one party or another, but once they’re elected they’re supposed to govern for the benefit of the state.  And I think if the public in Wisconsin were to be asked, how do you feel about what the governor has done, do you think this is fair or has he gone too far.  I believe they would answer he’s gone too far.  We want them to make the fiscal sacrifices, but we believe as a state in the power of collective bargaining.

CROWLEY:  Sure, but what specifically happens to teachers if all of this should pass?  Because, as you know, the criticism is that you’re protecting a union here, that it has nothing to do with the fiscal emergency in your state, which you say that you all are sympathetic to.

That this is about wanting to keep union rights.

BELL:  Absolutely it’s about wanting to keep union rights.  If it passes, my members would be looking at a anywhere from a 9 percent to 10 percent pay cut immediately.

BELL:  Well, it varies with the member because they go from people who are at the beginning of the schedule to the end of a career in teaching.

But it means in that in our communities across the state, there are going to be economic shortfalls that will have a real impact on small businesses, on communities and definitely on — on the schools and the children because we rely on those local economies.

CROWLEY:  Mary Bell, head of the Wisconsin Education Association Council, thank you so much for your time.  We appreciate it.