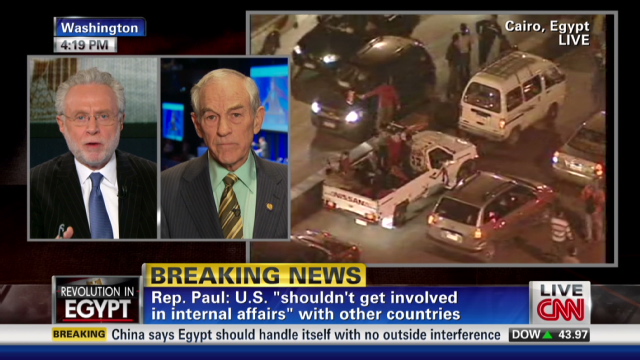 Rep. Paul: We’ve invested a lot of money in Mubarak and I don’t think it was a good investment.

Rep. Ron Paul (R-TX) spoke to CNN’s Wolf Blitzer about future U.S. funding for Egypt and more. A transcript is after the jump.

For highlights of CNN’s coverage throughout the day, please visit CNN.com/ThisJustIn.

FULL TRANSCRIPT: Please credit all usage of the interview to CNN

WOLF BLITZER, CNN ANCHOR:  Welcome back.   We’re continuing our coverage of the uprising Egypt, it’s now the revolution in Egypt.  Dramatic developments happening today, historic developments.  Hosni Mubarak is no longer the president of Egypt.  All power has now been handed over to the Egyptian military, which is in charge of this transition period leading towards free and fair elections.  How long that transition will take is anyone’s guess.

But joining us now is Republican Congressman from Texas Ron Paul.  He’s joining us now from the Conservative Political Action Conference in Washington.

Congressman Paul, thanks very much for joining us.  Let’s talk about Egypt, a subject you know quite a bit about.

REP. RON PAUL (R), TEXAS:  Well, we’ve invested a lot of money in Mubarak, and I don’t think it was a good investment.  It was stable for awhile, but it was building the resentment and the instability that finally burst out.

So I would say the 30 — the $70 billion was not worth it and that, unfortunately, many of those dollars ended up in Swiss bank accounts for his family.  So I think it was a big mistake, and we really don’t have the money to spare.  I don’t think it does anything for our national security.

PAUL:  Oh, yes.  I think so.  I mean, I’m not a believer in foreign aid.  And you know, I sort of liked what Eisenhower did in 1956.  I was a college student then, had remembered the Korean War, and when the British and the French were attacked by the Egyptians to talk the take the canal and they went to Eisenhower, Eisenhower said I don’t want to have anything to do with it.

So I think that was good advice and that’s probably the way we should have stayed that way, and we should do a lot less a lot sooner and not waste all this money because it tends to come back and haunt us.

It reminds a little bit about propping up the Shah of Iran.  Just look at that problem, and then we ended up with the Ayatollah.  So they’re not good investments.

I like the founders’ advice, you know, be friends with people and trade with people and negotiate and get along with them, but not to get involved in internal affairs and all these treaties and border squabbles.  It’s not in our best interest.

But it will come to an end, mainly for economic reasons, and that’s what happened to the Soviet system.  They didn’t end because all of a sudden they got wisdom.  They ended because, you know, they got bogged down in Afghanistan and they went bankrupt and the whole system fell apart.  And we could face a crisis just like that and we will have to pull back.

Is that your attitude?

PAUL:  Sure, I think so.  I mean, if we had a problem like that, we wouldn’t want foreigners in here to sort things out.  We would say it’s our responsibility.  So I think that’s the problem, that we’ve been too much involved.  So the sooner we get out of it, the better.

We shouldn’t — I mean, right now I’m sure our State Department, our CIA is looking around for our next guy that we can support because most of them now have expressed, well, we can’t really give them democracy, they might elect the wrong person.

See we’re all for democracy as long as they pick the right person, and we’d just as soon prefer a dictator that will do our bidding and then we give them a lot of money.  I’d like another option rather than either just bombing people or giving them money.  I would say friendship and diplomacy is a much better way to go.

I mean, this army was built by us, and the military industrial complex loved it.  They made a lot of money off it, but the army was there for all those 30 years was to protect Mubarak.  It wasn’t for national defense purposes.  So that’s our army, 450,000 troops that we more or less stocked.

BLITZER:  I was just going to say, administration officials going back to Republican administrations, whether Bush or Reagan, or Democratic administrations, the current one or Bill Clinton’s administration, they’ll argue this military assistance to Egypt is a good investment in the United States cause Egypt was an ally, a strategic partner and cooperated with the U.S. in the war on terror, for example.  So this was money well spent.  That’s the argument we’ve heard now for 30 years.

PAUL:  Oh, yes, but I think our current events prove my point.  It wasn’t well spent because it ended up in chaos, and we don’t know who the next dictator is going to be and it helped contribute to our bankruptcy.  So I would say it’s not well spent —

BLITZER:  Maybe the next —

PAUL:  Well, I’ll tell you what — that would be great, but I — I personally believe that the odds of that happening are much better if we’re not there picking up and — picking the individuals to spend our money on it.

We need to think about these problems in terms of what if another country did that to us.  The Democrats and Republicans and Independents would all rebel against that and that is what the American people don’t quite understand.

BLITZER:  Well, on that point I think you got that point, that Egyptians don’t want any outside interference in their domestic affairs.  They want to do what they need do and at least today they seem to be on that path, but it’s going to be a very, very difficult path.

Congressman, you’re at the CPAC, that Conservative Political Action Conference, in Washington.  One quick political question before I let you go.

Are you going to seek the Republican presidential nomination this year?

PAUL:  I haven’t made up my mind, and that’s a truthful answer.  And I’m sort of glad nobody else has made up their mind either, so I feel like I have a couple more months to sort it all out.

BLITZER:  You’ll make up your —

PAUL:  But thanks for asking.

BLITZER:  You’ll make your mind up in the next two months?

PAUL:  Yes, I would think so.  It would necessary in the next several months of some sort.  I don’t have a timetable.

BLITZER:  And do you want to respond to Donald Trump who told that CPAC conference last night, he told your supporters there that you don’t have a chance of getting elected.  I think I’m paraphrasing what he said, but he was brutally blunt in a Donald Trump kind of way.

PAUL:  Yes.  You know, some people pointed out that a lot of people said that about my views when I ran for Congress, and I was elected to Congress 11 times and I had the same views and some of my views are very libertarian, challenge the status quo of Republicans.  I had a very conservative Bible belt, Republican district and they said there’s no way you can win these — win an election by basing everything on the Constitution, people aren’t interested in that anymore.  So winning 11 elections would sort of raise a question on whether or not that was an accurate statement.