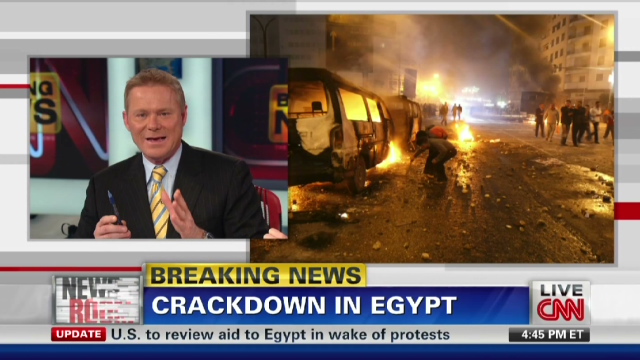 Extensive live coverage across all CNN Worldwide platforms, including: CNN/U.S. and CNN International on television; CNN.com; CNN’s free apps for iPad, iPhone and iPod touch; and CNNArabic.com, CNN’s Arabic language website based in Dubai which draws upon CNN’s global resources of journalists and video production.

There are six teams on the ground in Egypt: Ben Wedeman in Cairo (@benCNN), Nic Robertson in Alexandria (@NicRoberstonCNN), Frederik Pleitgen in Cairo (@fpleitgenCNN), CNN en Español’s Jose Levy in Cairo, Ivan Watson in Cairo (@IvanCNN) and Arwa Damon in Cairo (@arwadamonCNN).  Hala Gorani will arrive on Monday bringing the total to seven.

As the crackdown on media and communications continues, CNN is also covering the story through the lens of social media. Using CNN iReport and other platforms – much as the network did during the Iranian uprising in June ‘09 – CNN is showing this story in a different light. Mohammed Jamjoom (@JamjoomCNN), one of CNN’s Middle East-based correspondents, is currently in Atlanta working this story across all platforms from CNN’s Egypt Desk.

In addition to the reporting from Egypt, CNN is taking advantage of its large newsgathering hub in Abu Dhabi and the International Desk in Atlanta, which has numerous Arab speakers and specialists.

CNN’s DC political team are covering this story, including senior White House correspondent Ed Henry (@edhenryCNN), as it could change the political and diplomatic dynamics of the region and Israel’s security.

U.S. to assist Americans who want to leave Egypt

On the front lines of Egypt protests

‘CNN, which has an international channel as well as two channels in the United States, had a more robust presence in Egypt than any other U.S.-based television company. On Friday, the company had three correspondents in Egypt, and one more on the way.’ Brian Stelter, New York Times, January 28, 2011